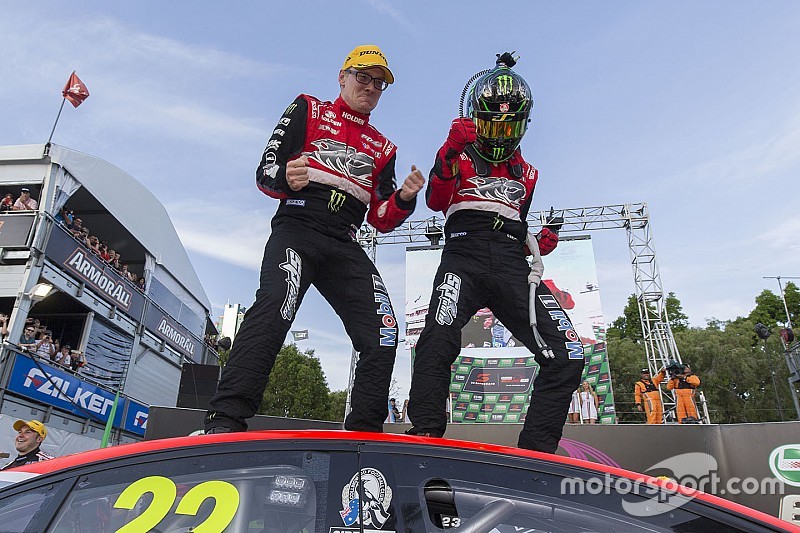 With finding backing tougher than ever, and big teams paying big bucks for endurance co-drivers, there is a growing trend of V8 Supercars talent opting for a part-time job rather than chasing a full-time one. Andrew van Leeuwen investigates.

Up until a little over a week ago, Jack Perkins had never won a V8 Supercars race.

Not through a lack of trying, not even through a huge lack of talent, but simply through a lack of opportunity. He’d never had a drive truly competitive enough to give him a decent shot at the top spot on the podium – until he signed on with Holden Racing Team for this year’s endurance races.

“I figured I didn’t want to be a field filler and chase a main game drive to finish 15th every week,” he told the media in the post-race press conference.

“If you look at the field there’s sort of six to eight cars that have got a chance of winning, and I figured it would be better off doing three races with one of those guys than 15 races making up the numbers.”

“I’m pretty committed to being an enduro driver from here forward. There are not many gigs full-time that would be of significant interest to me, that would present a better opportunity than sitting here now.”

It all makes way too much sense. Why would a young driver like Perkins bust his backside to scrape together a budget to snap up a seat in a third car at a midfield team for an entire season, when he can earn a wage and potentially win races with a plum enduro drive?

The life of a midfield V8 Supercars driver is a stressful one. At the end of the day, racing cars cost money, and one of the most common solutions to find that money is to have a driver with a budget come along and help out.

So unless a driver happens to have millions and millions of dollars of family money laying around – and yes, that does happen in V8 Supercars – the budget has to be sourced. Sponsors have to be found, deals have to be done, and occasionally, guys with an even bigger budget have to be outbid to win a seat.

And it never stops. Aside from the chosen few in the big teams who are on big wages and have multi-year contracts, the sponsorship cycle keeps moving. By the time Round 1 of this season comes along, it’s time to start looking for money to get on the grid next season.

It must be exhausting. Particularly for guys like Perkins who have been at it for a decade.

Then, even in the brief moments where everything is financially good in the world, there is the massive reality check of realising that all this hard work has been so you can scrap over 18th place 16 times a year.

Suddenly a full-time drive is not just time consuming and terribly expensive, but confidence-destroying as well.

When V8 Supercars decided to stop primary drivers from sharing cars at the endurance races, it opened up a whole new employment market.

The big teams now have to go out and pay guys to come and do three races a year. And they’re not paying peanuts either; an insider told Motorsport.com that at a decent team, deals start around the $60,000 mark – and in some cases go well over 100K.

Not bad for what is essentially three weekends work a year. And a lot better than forking out a million of your own cash to go racing.

It also presents a group of guys with the opportunities to win races, something that probably wouldn’t happen if they were racing full-time; for example, Paul Dumbrell won one race in nine seasons as a full-time V8 Supercars driver. Since ‘retiring’, he’s won the Bathurst 1000 once, and the Sandown 500 twice.

While a rather odd situation, it’s not necessarily a bad spot for the sport to be in. There will obviously always be some merit to racing in the championship full-time, especially for young drivers looking to break in, make a mark, and try and impress the Roland Danes of the world. That will always stop the back end of the grid becoming a talentless wasteland.

But it does offer a unique opportunity for the ‘been there, done that’ style drivers that have had a go at the big-time, not been given that rare shot at a paid, top-level drive, but have too much talent to be walking away from the sport. Think Perkins, think Dean Fiore, think Taz Douglas, think Tony D’Alberto.

Realistically, anything that creates paid employment for drivers is a good thing.