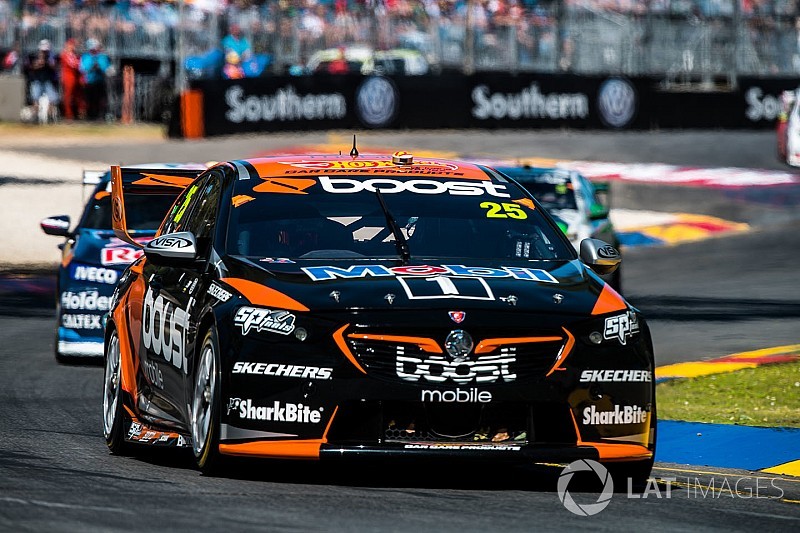 The Walkinshaw Andretti United Commodores are set to be fitted with parts developed by Andretti Autosport in the US ahead of the second Supercars round of the season at Albert Park.

Both team part-owner Michael Andretti and driver James Courtney confirmed last weekend that parts from the US are set to be introduced for the Australian GP, having missed the deadline to be ready for the season-opener in Adelaide.

The new bits are likely to be suspension-related, although both Andretti and Courtney were coy when discussing what has and hasn't been assessed and developed in the US.

"Our guys are definitely connected," said Andretti, who bought into the team last year as part of a three-way deal with Ryan Walkinshaw and McLaren boss Zak Brown.

"There’s really a good relationship and they meet every week and they come up with ideas.

"We’re currently working on a few things that hopefully will be on a car hopefully next race."

Courtney added that the team will switch to a twin-spring front suspension set-up for the Grand Prix, introduced along with what he described as the 'tricky bits' coming from the US.

"We’ll have things rolling in throughout the year. [Andretti has] got a couple of different projects that they’re all working on with different areas just because of the resources they have and the timeframes they can design and do all that, turn things around, with what will be quickest.

"There’s quite a few little parts that they’re working on and areas of the car.

"We’ve changed the way the whole twin spring set-up in the rear. It’s a completely new system now that you can feel working; that makes a big difference for us, driving-wise.

"And we’ve got a twin in the front to throw in for the Grand Prix as well, which we’ve never had before, and then also a couple of little tricky bits from the US.

"So it’s going to be exciting."

Both Courtney and teammate Pye ran brand the brand new ZB Commodore body shape in Adelaide, however only Pye's car was a brand new chassis.

According to Courtney, Michael Andretti really made his presence felt in the WAU garage during his visit to the Adelaide 500 – including playing an active role in the debriefs.

"It’s really good to have someone of Michael's experience, because when you get out of the car and you’re explaining something and talking with the engineering teams, obviously he’s been in the game a long time and he’s sort of... he’s [saying] ]yeah yeah I know that feeling – you can’t do this and it won’t load here'.

"When you’re trying to explain something to your boss, Ryan’s eyes just glaze over. But [Andretti] has a really mechanical understanding, so it’s good.

"And obviously when you’re a kid growing up watching him it’s quite a big deal, and then to be engaging with him like that, it’s pretty cool."

Courtney enjoyed a promising start to the 2018 Supercars season with a second on Saturday – his first podium since the race race last year – and a sixth on Sunday to leave him third in the points.

With teammate Scott Pye in the Top 10 both days, the team currently leads the team points over the Red Bull Holden Racing Team.