Fujitsu V8 Supercar driver Ashley Cooper succumbed to the injuries he sustained in a racing accident at the Clipsal 500 event in Adelaide, Australia on February 23, 2008. His death on Monday, Feb. 25, was due to a head injury. He never regained consciousness. 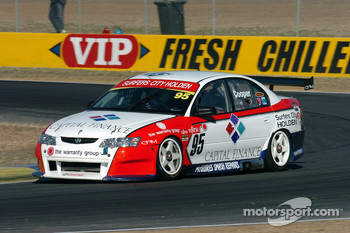 The 27 year-old actor-turned-racer was born July 11, 1980 in Sydney; he leaves behind his wife Casey and two children, Ella and Bailey and his parents, Alan and Maree.

"It was sad to learn that Fujitsu V8 Supercar driver Ashley Cooper has passed away," commented Wayne Cattach, CEO V8 Supercars Australia, in a press release. "Ashley fought a strong battle but sadly his injuries were too great."

"Our greatest sympathies and all of our wishes are with Ashley's family, in particular his partner Casey and their two children Ella and Bailey."

The crash was already under investigation by the Confederation of Australian Motor Sport (CAMS), the sanctioning body for the Australian V8 Supercar Series; the Fujitsu V8s are the ladder series.

"It is always a very sad day when any member of the motor sport community is taken from us," said Colin Osborne, CAMS president. "The motor racing community involves a close knit group of competitors and officials and I know that everyone will be feeling the loss of Ashley.

"CAMS will conduct its own full independent investigation to determine the circumstances leading to the incident."

The accident took place at a high-speed area on the street circuit in Adelaide, Cooper was traveling around 200kph when he hit the guard rail at the exit of the turn.

"We have had a preliminary look at the footage of the accident and from what it appears his car may have clipped the guard rail on entry to the corner. There is nothing that we can find that would indicate any failure of the seat, his HANS device, the straps or the roll cage," said Cattach.

Cooper's racing career was with Holden in 1998 and discovered he had the skill and passion. In 2006, he earned the V8 Utes Rookie of the Year and last year, he made his debut in the Fujitsu V8s.

"Our sport over-complies with the highest FIA rules for closed cockpit racing and most of our teams extend even beyond our own high standards with their own safety measures," Cattach said. "Certainly there have been accidents that would appear far more severe than was the case here when drivers have walked away unscathed. Such is the nature of motorsport."