Peter Brock lost his life today doing what he most enjoyed: racing. The Australian racing legend was passionate about the sport in which he participated. Today, his family, fans, fellow competitors and those in all walks of Aussie motor sports have lost a friend. 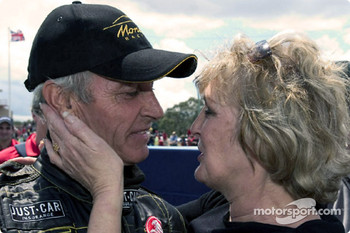 Race winner Peter Brock.
Photo by uli@ulistich.com.
Brock, 61, died of injuries sustained in an accident this morning around 1:50am AEST while running in the Targa West Rally in Perth Western Australia. The Confederation of Australian Motor Sport (CAMS) released the news of Brock's death and the condition of his co-driver Mick Hone.

Hone is listed in stable condition at a local medical facility. The two were competing in the rally driving a Daytona Coupe over the four-day event which began in Perth on Thursday.

Brock had just returned from England where he throughly enjoyed himself at the Goodwood Revival where his passion for the sport landed him the "Sprit of Goodwood" award.

Brock originally built his fame in the V8 Touring car series (now V8 Supercar) and yet, his sojourn in drag racing lived on as those in the sport of the quarter mile called him "Peter Perfect". And he had the dream that many touring and sportscar drivers wish for, a chance to race at the 24 Hours of Le Mans. He ran the legendary race twice, in 1976 in a BMW 3.5 CSL and with Larry Perkins in the Team Australia Porsche 956 in 1984.

Hailing from Melbourne, Brock was one of the prominent figures in Australian motor sports. He dominated "The Mountain", winning the Bathurst 1000 event nine times in the 1970s and '80s. The "legend" as he was known received that status along with the respect from many in the Aussie racing circles not only for being the "King of the Mountain" but for all of his accomplishments including nine victories in the late '70s and early '80s at the Sandown endurance classic event.

In 2002, he returned to the V8 series as a team owner. "Brocky" as many of his close friends called him remained active in all of Australian racing, from touring cars to drag racing to rally and cross-country events. He was a supporter of Andy Caldecott whom he raced against in the Australian Safari Rally. Earlier this year, Brock was one of many who mourned Caldecott's death in the Dakar cross-country challenge.

Holden team's racer Mark Skaife remembered his first race as he reflected on what Brock meant to him.

Five-time Bathurst winner Mark Skaife shared his memories of the childhood hero that he would line up alongside and later co-drive with.

"I remember the very first touring car race I had and I lined up alongside him on the grid," said Skaife today. "When I looked across and saw that I was on the grid next to Peter Brock, I knew I had made it."

And in 2004, Skaife, who has won five Bathurst events, had the opportunity to co-drive with the legend on the "Mountain". "Brock's ethos was to get out there and have a red hot go. He lived his life like that. Brocky was Australia's motorsport icon and the legendary ambassador for our sport."

Russell Ingall shared his thoughts on the loss of Brock, "Peter Brock is the reason that probably half of the V8 Supercar field are in motor racing, including myself.

"He was the complete package on and off the track and to loose him in such circumstances is a tragedy," Ingall added. "He will never be replaced and I doubt anyone will ever come close to winning nine Bathurst 1000s again."