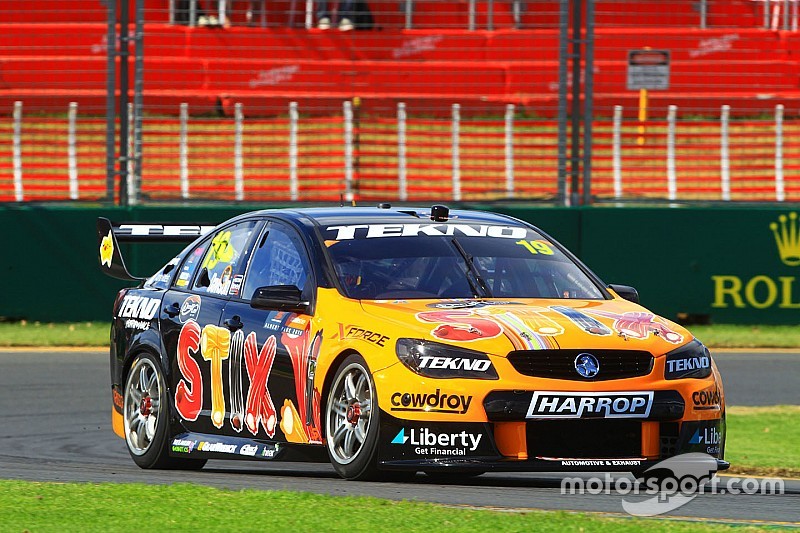 During our stay in Melbourne for the Australian Grand Prix, Motorsport.com spent some time in the paddock of the famous, fast and furious Australian V8 Supercar series.

We also enjoyed a talk with Will Davison, driver of the No. 19 Holden Commodore VF entered by Tekno Autosports. Steve Hallam, former Chief Racing Engineer at McLaren F1 heads the Tekno team based in Stapylton, Queensland.

After two seasons with Erebus Motorsport – which saw him earn one win last season – Davison, the 2009 championship runner-up, now drives for Tekno Autosport and is behind the wheel of a Holden built by Triple Eight Race Engineering.

“I raced in the British Formula Renault 2.0 series in 2002, competing against Lewis Hamilton. He finished third and I was fourth in the championship”, Davison told us. “In British F3, I raced against Nelson Piquet Jr. and most of the guys who are in F1 today. Then, Will Power and I got the chance to test a Minardi F1 car thanks to Paul Stoddart. I got really close to F1. We worked very hard for many years to make it happen, but money was a big issue. I was high in debt, and I got a professional opportunity back here and I had to take it.”

Davison has been competing in the Australian V8 Supercars series since then. He told us where these very unique race cars fit in the global motorsport environment. “They’re probably in between a Sprint Cup car and a GT car. The regulation controls the category, but all the small details are very refined. The cars are built in-house, and although there are a lot of control components, there’s still enough freedom for the engineers to try to find an advantage here and there.

“The Supercar has more aerodynamics than a Sprint Cup car, but not as much as a GT car. The aerodynamic is still enough to make a difference, certainly because the tires we use are quite small. It is quite an under-tire car, which makes it quite sensitive to the aerodynamics and the mechanical balance; it’s very sensitive to getting it right. With 650 bhp under the hood and a locked differential, it calls for a unique driving style. It’s difficult to get the most out of it, but it’s an exciting race car. When it’s good, we can be pretty aggressive, going over the kerbs. It’s got quite big brakes, bigger than on a Sprint Cup car, so you can brake very late. It’s also nicely built inside with the sequential gearbox and the live telemetry with sensors on the dampers and the suspension, so we have quite some things to play with,” Davison told Motorsport.com.

Davison is happy that these cars are not too much technically sophisticated. “We can enjoy some bumper-to-bumper racing without ripping some little carbon fibre winglets like on the GT cars,” he said. “We can ride very close from one another. They are very nice quality purpose built race cars, but we don’t have electronics aids, traction control or ABS. They’re a good compromise, very rewarding cars when you get them right, but you have to drive them technically very well. It’s very easy to overdrive them, lock wheels and ran wide in corners, don't the traction down and finally be very slow. A very particular technique is required to drive these cars well.”

The Melbourne native explained that the field is now much more competitive than it was just a few years ago, and that produces some highly exciting, door-to-door racing.

“The cars now have become more even from the back to the front of the grid than it was some six or seven years ago when there were not so many good cars and there was a big difference,” the Tekno drover told us. “Now, all the equipment is good, and the new generation car is probably a little more user friendly. The technique we used to have with the old car was very tricky to get used to. Today, we have an independent rear suspension, as well as bigger brakes and we use a softer compound tire for the majority of the racing, so it gives the car more grip and it means that the driving style now is not so different to any other type of car.”

Qualifying for the non-championship, four Melbourne races showed that the top 18 cars were covered by just a second and the top 25th starter was just 1.5 seconds off the pole sitter’s pace. “It’s very close racing and it all comes down to the very small details. We spend a lot of time with the engineers, trying to pinpoint exactly what we need,” Davison continued. “There are many, many things we can adjust on these cars, and there are many ways to achieve a specific result. You need to understand every specific track, surface and conditions and hopefully and very quickly pinpoint what needs to be adjusted on the car to get it in the sweet spot. Because when they’re in the sweet spot with the right tire pressures, it’s really great. You don’t have to force it.

“The more you understand that, the more consistently you’ll be right up there, but keep in mind that this is a very small operating window,“ Davison mentioned.

Words with Cam Waters: No margin for error