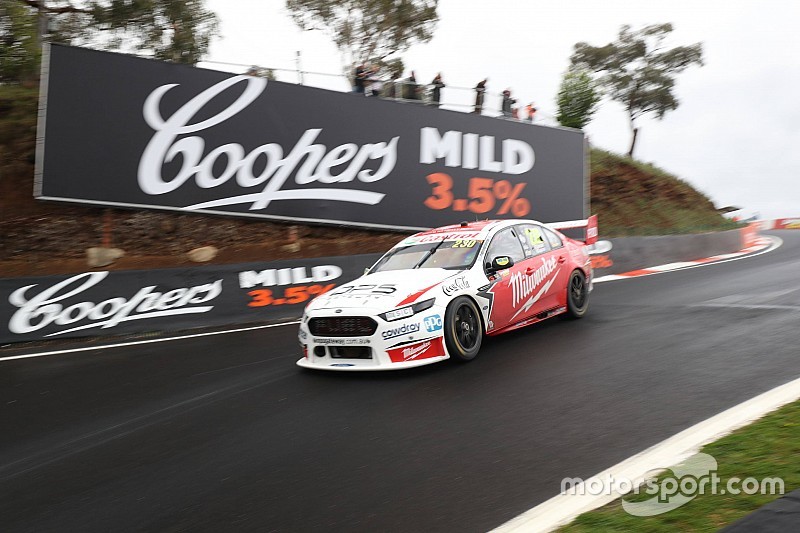 Will Davison led the way in a weather-affected opening practice session for the 2018 Bathurst 1000.

The Great Race weekend kicked off in wet conditions, the track slowly drying over the course of the hour but at no point properly reaching the crossover point to sticks.

In fact there was only one single attempt at running a control dry weather Dunlop, Tim Blanchard tip-toeing his way around for lap with 10 minutes to go before heading back to the pits to re-fit wets.

Thanks to that morning rain the times started out in the 2m30s, Shane van Gisbergen leading the way in terms of improvements as the benchmark moved down to a 2m28.159s before the halfway mark,

Richie Stanaway then enjoyed a stint on top thanks to a 2m27.339s, before the next spell of quick times during the best of the track conditions inside the last quarter of an hour.

It started with van Gisbergen returning to the top with a 2m26.357s, Chaz Mostert taking over with a 2m25.538s with six minutes to go.

That looked like it was going to be good enough to top the session, only for Davison to grab P1 right at the flag with a 2m25.024s.

“It’s really hard to learn much when it’s greasy like that,” said Davison.

“You make a few changes to the car and can’t learn too much, other than tyre pressures.

“We read the conditions, made changes, there was not too much risk.”

Aaren Russell put in a last-gasp lap of his own to go third quickest in the #7 Nissan, Michael Caruso doing likewise in the sister Altima.

Mark Winterbottom ended up fifth quickest, having sat second behind Tickford teammate Mostert with just seconds left in the session.

Fabian Coulthard was the best of the Penske Fords in sixth, van Gisbergen slipping back to seventh after not getting a lap in right at the end when the track was fastest.

Despite the difficult conditions there was no carnage from the first hour of running, the only stoppage to the session coming thanks to reports of wildlife on the track.

Scott McLaughlin, one of the pre-race favourites, was just 17th quickest after opting to run more of a dry set-up despite the wet conditions.

“We basically left it as a dry car, almost, and just tried to learn as much as we could,” he said.

“It felt comfortable, very predictable, which is nice, but we’re probably not pushing the limit just yet.”

The action continues with a co-driver-only practice session at 12:55pm local time.