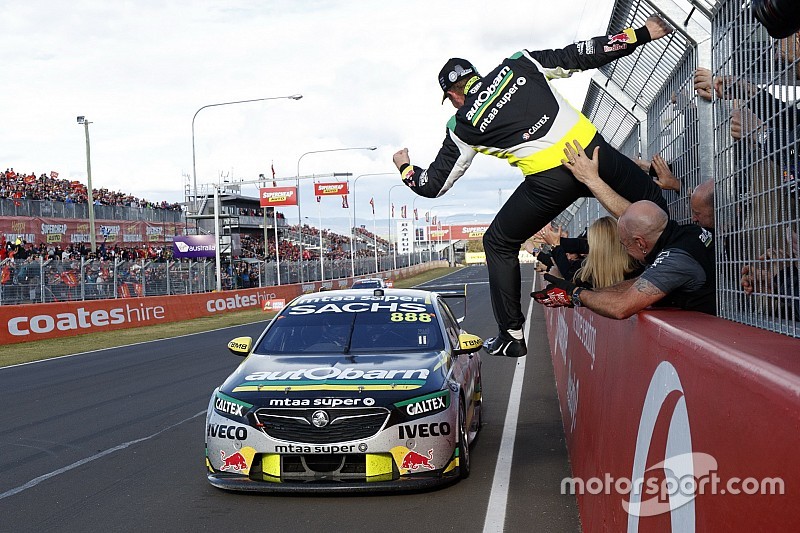 Craig Lowndes is now a seven-time Bathurst 1000 winner, while Steve Richards has five crowns to his name, after the veterans combined to take a dramatic victory at Mount Panorama.

The #888 Holden only took over the lead for the first time with less than 30 laps to go, Lowndes having hunted down long-time leader David Reynolds who was struggling with leg cramps.

To that point Reynolds and Luke Youlden looked to be set to go back-to-back, only for the cramps to not only let Lowndes into the lead, but result in a pitlane penalty when Reynolds couldn't keep his foot on the clutch during a stop.

Reynolds ended up needing to pit again and hand over to Youlden, the #9 Erebus entry ending up down in 14th.

That all paved the way for Lowndes and Richards to take a fairytale win, in what will be there last appearance together before Lowndes retires from full-time competition.

Reynolds and Youlden combined to control the opening five stints of the race, the car in the effective lead for all but a handful of laps.

On Lap 93 the race was given a reset when Bryce Fullwood beached the MSR Holden at the final turn, the Safety Car being called on the very lap that the majority of the co-drivers ticked over the magic minimum requirement number.

Reynolds was in no danger of losing his lead while taking over from Youlden, but it did mean the pair's track advantage was decimated as the rest of the field, led by Lowndes, closed in during the caution.

Lowndes and Richards had hung around the top group all morning, the only hiccup being when Richards ran wide trying to get into the pits at the end of the third stint. Lowndes recovered sharply once in the car, getting the car back into the game by the time the critical caution rolled around.

When the race restarted on Lap 97, Reynolds and Lowndes took off out front. The pair spent the first 10 laps separated by less than a second, Reynolds needing to break his own lap record to ease away.

Behind them Mostert, Pye and van Gisbergen staged a scrappy battle over third, the Tickford driver wrestling the spot from the Walkinshaw Holden on Lap 107.

McLaughlin started to work his way into the game a the sixth stint wore on too, a free pass on teammate Coulthard on Lap 112 leaving him sitting right behind van Gisbergen.

The penultimate round of stops was straightforward enough at the front, Reynolds holding position over Lowndes. However behind the top two there was some action, Mostert, Pye and McLaughlin all ending up fighting over the same bit of road.

In the end Mostert dropped to fifth, McLaughlin moved up to fourth, and Pye re-claimed third.

Reynolds maintained his stranglehold for the majority of the seventh stint, keeping Lowndes at arm's length. However by Lap 134 the advantage disappeared, before Lowndes charged into the lead a lap later.

As the lead changed hands Reynolds radioed in to say he was struggling with cramping in his legs, Lowndes streaking away out front as Erebus weighed up whether to pit Reynolds and stick Youlden back in the car.

Reynolds opted to push on, but didn't have the strength to keep the clutch in during his Lap 140 stop. That meant his rear wheels spun before the car hit the deck, resulting in a drive-through.

He then pitted to hand over to Youlden, cutting a distraught figure in the Erebus garage.

Pye and Luff repeated their 2017 effort with second place after a clean second half of the race, followed by McLaughlin and Premat.

Mostert and James Moffat's fourth place finish was a remarkable result given he was involved in a bizarre clash with teammate David Russell early in the second stint.

Mostert brushed the inside wall at Forest's Elbow while trying to pass Russell, which fired him into the side of the #6 Falcon. He got off mostly scot-free, while Russell and primary driver Cam Waters were left with a bent car that took 13 laps to repair.

Waters wasn't pleased about it either, overheard by TV cameras shouting “sorry man, we just got f***ed up by our f***ing teammate".

Whincup and Dumbrell's poor run of Bathurst luck continued, a bizarre right-front wheel departure ending their hopes of a result.

The #1 Red Bull Holden was starting to shape up as a real contender, too, Dumbrell sitting a close second when the wheel took off on the run to the first corner on Lap 45.

After limping home on three wheels, the Triple Eight crew crucially got the car back out just  a single lap down. And, thanks to the Lap 94 Safety Car, Whincup was back on the lead lap – 47s off the lead – by Lap 97.

The pace wasn't quite there to stage a miracle comeback, although Whincup was able to charge his way to 10th.

Reynolds on Bathurst heartbreak: 'My body gave up'