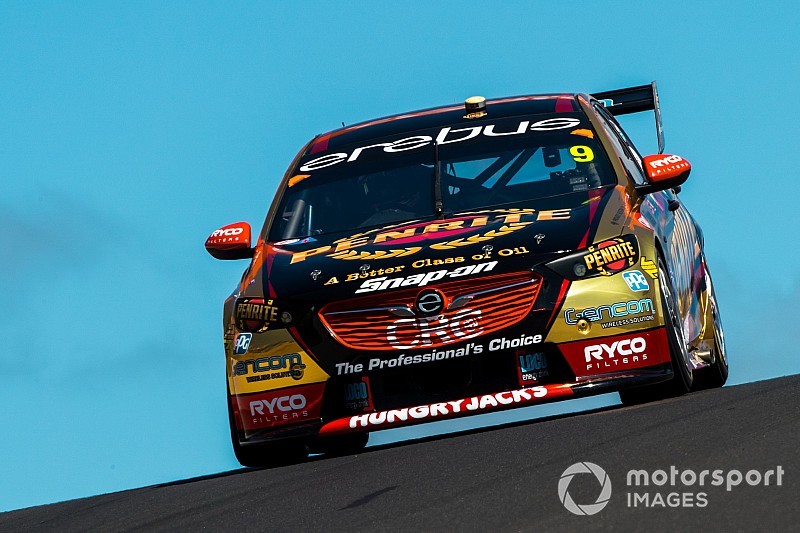 Reigning Bathurst 1000 winners David Reynolds and Luke Youlden are leading the Great Race at the midway point, while both the Red Bull Holdens have hit trouble.

Reynolds and Youlden have combined to lead the majority of the first half of the race, apart for a short stint where Alex Premat put the #17 Penske Ford in front.

There have been dramas for both Red Bull Holdens, Earl Bamber currently circulating down in 15th in the #97 car after a slow fourth stop.

Jamie Whincup and Paul Dumbrell are a whole lap down, after car #1's right-front wheel sheered off while Dumbrell was running second.

Reynolds made a near perfect start to the race, bolting from pole as teammate Anton De Pasquale slotted into a rear gunner role in second.

It wasn't an Erebus one-two for long, as De Pasquale ran wide at The Chase on Lap 3 before Jamie Whincup pounced at the same spot a lap later. But by then Reynolds has already cleared out to the tune of 3.5s.

Behind the leaders it was Garth Tander that was the star of the opening handful of laps, the GRM Holden driver pulling a brilliant move around the outside of Turn 1 to jump from 10th to fifth.

On Lap 16, De Pasquale, who settled into fourth place, saw his race begin to unravel, starting with a slow driver change while handing over to Will Brown. The car was then back in the lane a couple of laps later thanks to mechanical black flag, the culprit a passenger door that wouldn't stay shut.

Lap 19 saw the rest of the early leaders start to pit for the first time, Whincup handing over to Paul Dumbrell before van Gisbergen – who was 4.9s adrift of the lead – came in to swap with Earl Bamber on Lap 20.

Reynolds ran deeper into the fuel window, coming in on Lap 22. Youlden, emerged back in the lead of the race, just under four seconds clear of Bamber and Dumbrell.

The early part of the second stint saw some unfriendly fire between Tickford teammates, Chaz Mostert running Dave Russell into the wall at Forest's Elbow. While Mostert was able to keep going in seventh, Russell had to limp a very broken #6 Falcon back to the garage.

Meanwhile the battle for the lead was heating up, Youlden falling into the clutches of the Red Bull cars thanks to a huge lock-up at Turn 1 on Lap 28. The leading trio were effectively side-by-side up Mountain Straight, Youlden just hanging onto the lead as Dumbrell slipped past Bamber for second.

On Lap 34 that position change between the Red Bull cars proved crucial, thanks to the #25 Walkinshaw Holden stopping on Mountain Straight with an engine problem.

The resulting Safety Car led to most of the field making a second stop, Bamber forced to stack behind Dumbrell and dropping back to sixth.

But that proved to be the least of Triple Eight's worries; three laps after the restart Whincup and Dumbrell's Bathurst curse swung into full effect, the #1 Commodore shedding its right-front wheel on the run to Turn 1.

Dumbrell got back to the pits, but only after the best part of a full lap spent limping around on three wheels. A speedy repair on the right front corner and a new front bar meant the car got back out before going two laps down.

That put Premat in the #17 Penske Ford into second, the Frenchman then forcing the first proper lead change of the race on Lap 45 with a move on Youlden at the last turn.

The next round of stops brought on the next lead change, with a slow stop for the #17 dumping McLaughlin down to eighth on the road.

That third round of stops didn't go well for the #888 Holden either, Richards running wide on his way into the pits. Having come in running fourth, Lowndes remerged back in 13th.

As the stops shook out it was Reynolds left back in the lead, back to a 4.2s advantage over Shane van Gisbergen just like in the first stint.

There were hints of rain around the Lap 70 mark, with damp patches across the top of the Mountain and down Conrod Straight.

It never got wet enough to switch to grooved tyres, though, the next round of stops instead kicked into life by a Safety Car on Lap 77.

There was more pitstop drama for the #97, van Gisbergen coming in running second (10s behind Reynolds behind the caution) and Bamber re-emerging down in 16th after a disastrously slow 78-second pad and rotor change.