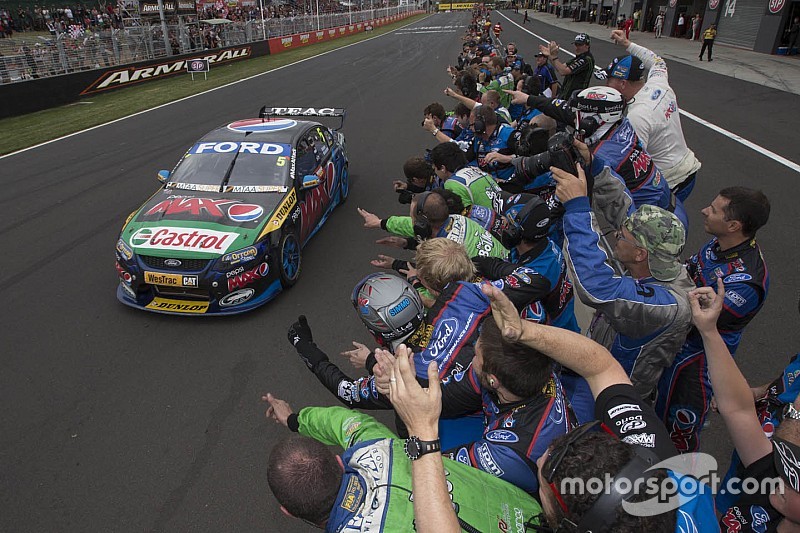 A Bathurst-winning Tickford Ford Falcon has appeared on a popular Australian used car website with a $625,000 price tag.

Tickford Racing has taken an unusual approach to selling the 2013 Bathurst 1000 winner, posting a light-hearted listing on carsales.com.au.

The car, which won The Great Race in the hands of Mark Winterbottom and Steve Richards, has been advertised as a '2013 Ford Falcon XR6 MkII Manual', with just 52,000 kilometres on the clock.

"This Ford Falcon showcases a full suite of performance features. All servicing is up to date. Only travelled 52,000km but a rebuilt engine means it's as good as new. Garaged and has been washed on a regular basis. Exterior is very good.

"Humour aside, this is the history-making #5 Pepsi Max Crew/Ford Performance Racing Falcon FG that won the 2013 Supercheap Auto Bathurst 1000 in the hands of Mark Winterbottom and Steve Richards and is now for sale, including the V8 5.0 litre race engine.

"One of only 14 Falcons to win the famous Bathurst classic over the race’s long history – and one of just 10 to survive today – the FPR 1214 chassis is being restored to its 2013 Bathurst-winning state and is now available for sale.

"This car claimed the team’s first Bathurst win and the first for a factory-entered Ford in 40 years since Allan Moffat and Ian Geoghegan had won in a Ford Motor Company-run Falcon XA GT in 1973.

The car will also come with original set-up sheets and driver notes, its competition logbook, and a 10-lap handover event at Winton.