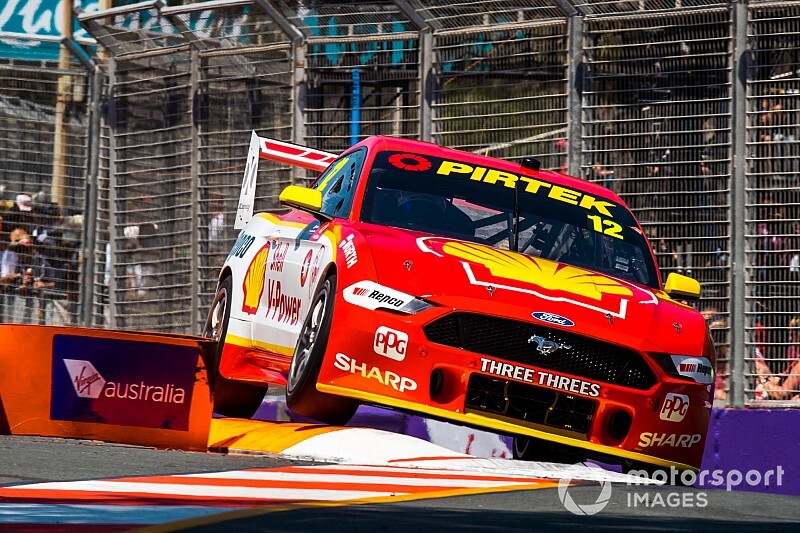 Having made a fast start from 16th on the grid, Coulthard running ninth by the end of the first lap, the #12 Penske Ford's race began to unravel when a faulty lambda sensor left the car at risk of contravening the category's fuel mixture regulations.

The team re-mapped the engine during a lengthy Lap 22 stop, which involved switching the car off and then firing it back up.

The second part of that process proved costly, the elevated rear wheels sent into a spin as the V8 roared back to life. That left race control with little choice but to hit car #12 with an additional 15-second time penalty for a pitstop breach.

Detailing the incident, DJR Team Penske boss Ryan Story confirmed that it was the lambda sensor that caused the initial delay.

However he says it was an issue with the driver change, complicated by the height difference between Coulthard and D'Alberto, that directly contributed to the penalty.

"We had a lambda sensor go out and we sought permission from Supercars to put a new map in the car," said Story.

"Under the new lambda rule that we have this year to run at a nine-zero, basically when the closed-loop system fails, you're relying on the base map. But if there's an issue with the sensor the car will run rich rather than at a specific number we try and target.

"So we got permission to put a new map in the car. When you plug into the car, before you can send anything to the car you have to wait for the car to acknowledge that you're connected. That can sometimes take a little bit of time, so we lost a lot of time through that process.

"And unfortunately through the driver change we had some issues getting the secondary belts in place, which meant the car was in the air and it was started before it was dropped.

"That wasn't the plan. The intent was to have the car on the ground when it was restarted, but because there were some issues with the belts... I don't know if you've seen Tony and Fabian stand next to each other, but there's a bit of a height difference there."

The regulations around pitstops and wheel spinning were tweaked for this season, off the back of the Shane van Gisbergen controversy from Pukekohe last year.

Drivers are now required to have a line-locker or handbrake activated during a stop to avoid excessive wheel spin, with a number of teams, including DJRTP, having been stung during the course of the season when line-lockers have failed – even if the wheels didn't spin.

Both the failure to use a line-locker and wheel-spinning can avoid being penalised if permission is sought from Head of Motorsport Adrian Burgess prior to a stop.

However in this case Story only sought permission not the use the line-locker, which meant taking the wheel-spinning penalty on the chin.

"Some of the fines we've seen this year haven't been for spinning, they've been for the line-locker," said Story.

"So I asked permission for the line-locker because we always anticipated that the car would be on the ground when it was started.

"But a few things didn't quite go as planned and it necessitated keeping the car in the air longer than it needed to be or ideally we could have like.

After dropping to the back of the field thanks to the long stop and subsequent penalty, Coulthard and D'Alberto fought back to finish Sunday's race in 11th.