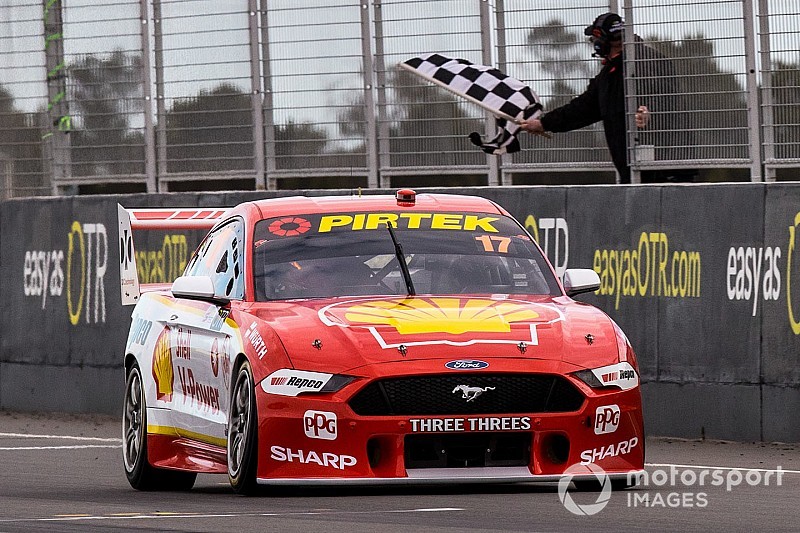 Scott McLaughlin has equalled Craig Lowndes' record of 16 wins in a single Supercars season with a comfortable second victory at The Bend.

The DJR Team Penske driver set up the record-equally with an early second stop, which helped him clear early leader Will Davison and cruise to a 16th triumph of the year.

He is now poised to become the new record holder, with nine opportunities to move past Lowndes' benchmark still on offer.

McLaughlin made a tardy getaway from pole, the Shell Ford relegated to third as Davison and Jamie Whincup blazed past at Turn 1.

Whincup looked the raciest of the top three throughout the opening lap, and looked to wrangle the lead from Davison at Turn 3 on Lap 2.

However a half-hearted dive put him off line at the exit, which allowed McLaughlin to barge his way into second.

McLaughlin quickly closed up on the back of Davison, but unable to find a way through, and with Whincup and Chaz Mostert looming in his mirrors, he opted to take his first stop on Lap 9.

Davison followed suit a lap later, limiting the undercut enough to hang on to the effective lead.

At the same time Mostert briefly got ahead of Whincup with a pass at Turn 14, only for Whincup to win out as they each took stops over the next two laps.

Mostert then put another pass on Whincup on Lap 15, this time using Turn 1 to shift into third spot.

McLaughlin quickly sparked the second round of stops for the leaders by pitting from second on Lap 17.

Davison responded next time around, however an airbox fire as he hit the lane proved costly. His Mustang died twice on its way into its pit bay, the time loss enough to see McLaughlin sail into the effective lead.

Once in front there was no looking back for McLaughlin, who left Davison to do battle with Mostert as he charged to a 2.4s win.

“It’s really awesome. I couldn’t be more proud of the guys for the turnaround we’ve had [since 2018],” said McLaughlin.

“It was one we circled to really come back for and I’m so stoked. It was super-racing, I didn’t get the best start, but good racing towards the end.”

Mostert, who made his second stop on Lap 20, was able to put significant pressure on Davison in the early part of the second stint.

However Davison was able to weather the storm, keeping Mostert at bay before easing the gap back out to just over a second by the finish.

Jamie Whincup kept the trio of Mustangs in his sights for much of the second stint, only to run wide on the way out of Turn 10 with six laps to go.

That allowed Nick Percat to sneak through into fourth, Whincup forced to settle for fifth.

Shane van Gisbergen made 10 spots to finish sixth, as Anton De Pasquale led the Erebus charge once again in seventh.

Being at the wrong end of the Top 10 means Coulthard has lost second in the standings to Mostert, although the Tickford driver is still a whopping 573 points behind runaway leader McLaughlin.