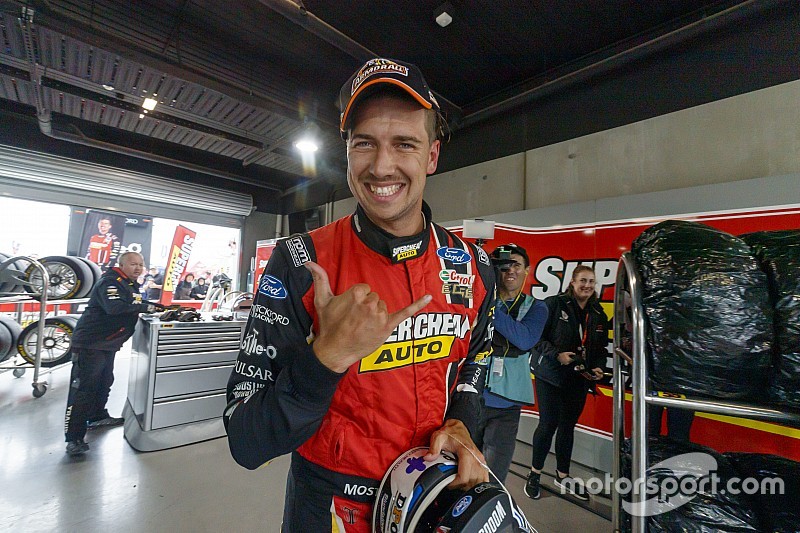 Light, persistent rain made for tricky conditions throughout Q2 and Q3, however the moisture had little effect on the outright lap times.

Instead it was another record-breaking session, McLaughlin the first to go under his own benchmark lap with an eye-watering 1m47.696s on his first run in Q3.

Lacking the fuel for a final run thanks to going twice in Q2, McLaughlin could only hope that the seven-tenth gap over the field would be good enough.

However Mostert had other ideas, a remarkable 1m47.522s at the flag denying McLaughlin in spectacular fashion.

“I don’t know what happened out there to be honest," said Mostert.

"The car was pretty good at the end there, but yeah, it’s pretty sketchy. When you see drops on the window around here and [it's] such a smooth surface, you know that it’s going to [get] really slippery when you don’t realise it.

"For me it was just stay on the black stuff."

McLaughlin will still start from the front row, but was left to rue the lack of fuel and a mistake at Turn 1.

"We ran out of fuel so we didn’t have enough fuel to go out and have another lap, but that’s probably my fault because I stuffed up the first session," he said.

"But [that was] a bloody good lap by Chaz, so well done to him and his guys.

“I definitely stuffed up, Turn 1 I stuffed up… I nearly went off there, so I was actually lucky to get that lap in.

"We will just have to come back and win the race."

Mark Winterbottom improved on his final run to grab third on the grid, having come all the way from Q1, with Anton De Pasquale set to start on the outside of the second row.

Cam Waters will start fifth alongside Nissan driver Andre Heimgartner, while Fabian Coulthard could only manage seventh in the second Penske Mustang.

Shane van Gisbergen and Jamie Whincup were eighth and ninth, their best showing of what's been a difficult weekend so far for the Red Bull Holden squad.

Will Davison will start 10th, after a promising final run was cut short when his Tickford Mustang's engine died.

Outside of the Top 10, Simona de Silvestro secured a career-best Supercars qualifying result with 13th.

“[I'm] pretty happy," she said. "I think the test day we did a couple of weeks ago was really good for us, and on our side of the garage I’m really starting to get the car where I want it.

"I’m pretty positive about that and now we just need to keep working to be even better."