Brad Jones opens up on survival in Supercars 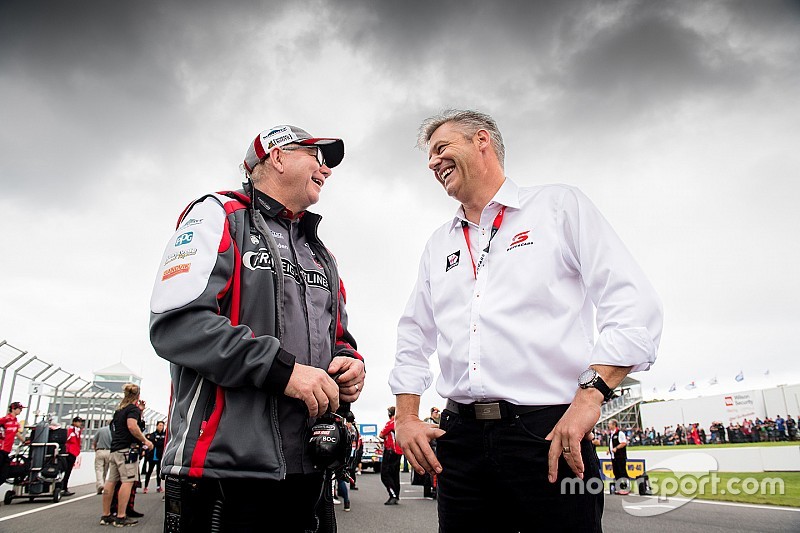 MOTORSPORT.COM: Brad Jones Racing is a pillar of consistency in Supercars, without a huge manufacturer deal. How do you, as effectively a privateer team, ensure survival year on year?

BRAD JONES: The model has changed. There are only two teams that have manufacturer support, so once you strip that away we’re certainly in the mix. This year is a bit of a struggle without having a major sponsor for car #8, but we’ve made it up with a lot of little deals and support.

I just think the model is a lot different than it was. You used to be able to come along, get a certain amount of money from a manufacturer, and then top it up with some sponsorship for the cars. I don’t think it matters what sport you’re involved in at the moment, it’s very difficult.

So the secret is evolving with the sport?

I don’t think there’s any secret, but you have to change and evolve with the sport. We’ve gone from being a category dominated by manufacturers, to one that has very few. Is that a bad thing? Things certainly have changed. We’re very much an entertainment business, and I’m not sure manufacturers are required to make that work. 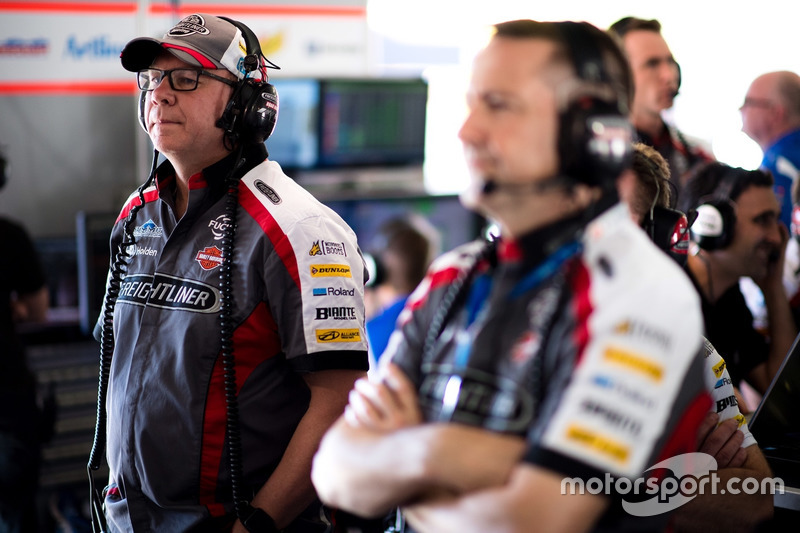 Does the series risk being too reliant on manufacturers?

I think the model going forward needs to be one where teams can survive with or without a manufacturer. The whole business has been working hard to make sure that’s a reality; the income we derive from the business is an important part of survival.

Survival is an interesting thing. To survive, you do whatever you need to do. And the evolution of the category has dictated that you quite possibly have to do it without manufacturer support. That’s really where we fit. We don’t have a manufacturer but we’ve got strong sponsors. I think we’ve got a good model, we’ve had longevity in the category, and we’ve got that going forward.

How would you sum up the year so far in terms of car performance?

I think we’re fast. The results and championship position don’t reflect where are. We have good car speed, but I think we’re qualifying out of position a bit.

It’s hard. It’s been a tough start to the year, but I still feel there’s good pace there, we just haven’t really released it.

If you talk about the drivers, Tim Slade is in his second year and I think he’s very comfortable with us all now, and we’re certainly comfortable with him. We’re seeing some of Tim’s best work; he’s not making mistakes, fast but consistent, he’s doing a really good job.

Nick Percat is new to the team, but he likes the car similar to where Tim is. I feel that, with all things equal, there’s nothing between them.

And then we’ve got Tim Blanchard in the Cooldrive car, and this is the first time he’s been with a team two years in a row. The thing people forget about Tim is that he’s actually got a job outside of motorsport, it’s not like all he ever thinks about is how to drive a racing car. I think he’s doing a really good job, because this is a tough category to do well.

The other thing about our guys is that they all fit really well together. They’ve all grown up together, raced in different teams, and they all get along really well. That helps. When it comes to gathering and deciphering information they look for similar things, and that’s a bonus. 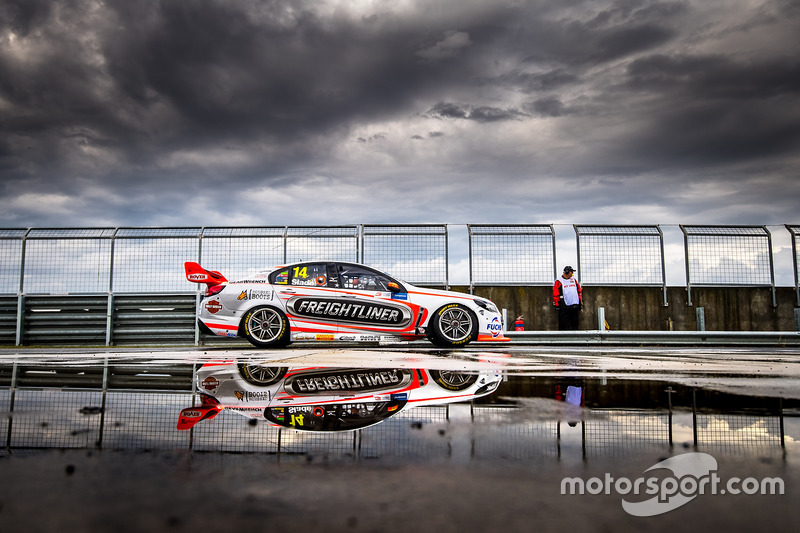 The new-look driver line-up is genuinely very strong. It must be exciting for the team to have relatively young, front-running drivers like that.

Yeah it is. It’s always hard making bold predictions, but we’re going through some R&D at the moment and I feel like it’s a bit of a… sometimes you get it right, and sometimes you don’t. But when it’s right, we’ve got two really fast guys.

The problem when you’re having accidents is that you spend so much time repairing the car that you’re not really looking at what you need to do to improve it. While I think our teams is one of the best at being able to step over that obstacle, the truth is that it’s still very draining on the group. My guys have done an amazing job at continually stepping up to the plate and repairing the cars, but it does take its toll. And one of the ways is that you’re fixing stuff, and not thinking forward – even for the engineers, who lead that part of the organisation. It makes it hard.

There was a lot of talk about Dave Reynolds being a target for the 2016 season, and then Tim joined the team instead. Did he step up quicker than you expected? Winton last year was pretty much a perfect performance…

What tripped us up with Tim a little bit is at the first test at Winton he was really fast, and then we just expected to go to Adelaide and be just as fast. But it just took a little while to gel. When we left Perth last year, he was one of the quickest guys on track in the last stint – so I felt that we were going to be fast, it was just a matter of when.

Honestly speaking, we were looking at Reynolds and we were looking at Tim. But when you go back through Tim’s history, he finished fifth in the championship with Ross and Jimmy Stone – that’s not just a lucky weekend. And the truth is that he fits really, really well into the team. I couldn’t ask more from a driver.

I feel like I have a relationship with him like I had with Jason Richards, or when Jason Bright joined the team. That’s really good, he’s a good fit for us. 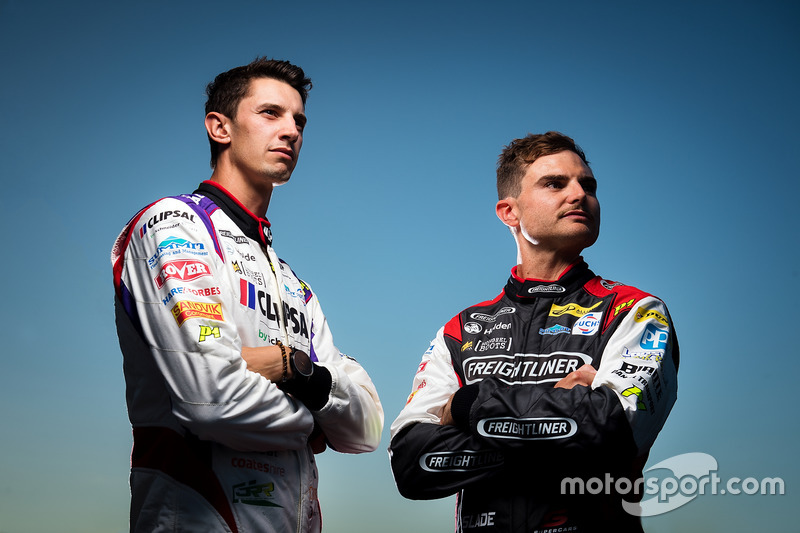 And Nick? He’s obviously very quick, but you mentioned even before he joined the team about looking to round off some of the rougher edges.

There’s a couple of things about that; Nick’s had a pretty rough start to the year, so it comes back to what I said before about shit going wrong all of the time.

I’ve sat down with Nick and we’ve talked through all the areas I think we need to work on. He’s a really nice guy – but unfortunately he doesn’t always come across like that on TV when he’s angry.

The last two years would have been frustrating at times, too…

Yeah, it’s been hard. We all know what our strengths and weaknesses are, and I have to say he’s working really hard on getting where he needs to be to fit in with the group. It’s a work in progress and it will be for a little while yet.

But his pace is unquestionable, and I’m really excited that he’s with us. I’m excited about the potential of the future and what he can do.