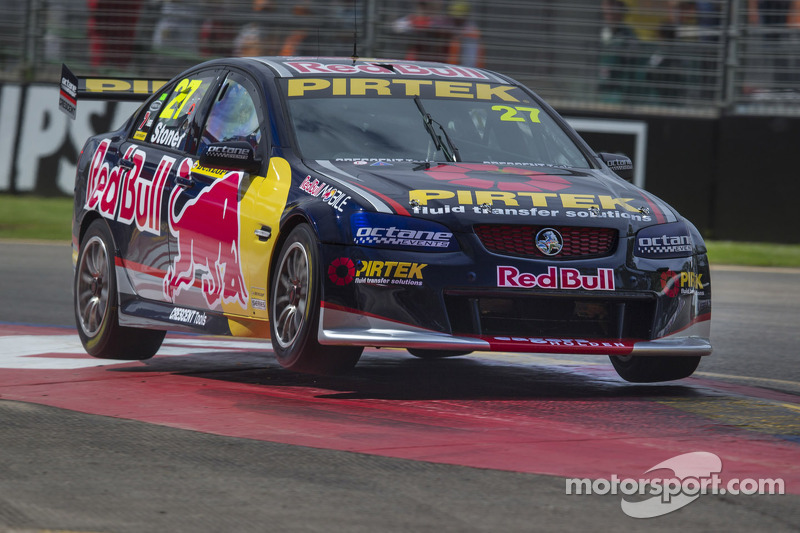 Less than twenty-four hours before his first ever car race, Casey Stoner believes he is on the right path to success in his V8 Supercars debut this weekend at the Clipsal 500, in Adelaide.

In general, it wasn’t as daunting as I thought it would be

Stoner lopped more than a full second off his best lap time from the first to second session today, ending the day with a strong 1m23.4282s lap that was just 0.1s slower than second-year driver George Miedecke, and the same margin quicker than the experienced Daniel Gaunt.

Having battled the best of the best on two wheels, Stoner told media today that he felt his first true day at the office was ‘less daunting’ than he expected.

“In general, it wasn’t as daunting as I thought it would be, it’s a bit more easy to deal with,” he said.

“Everyone has been really good to us today. There are all sorts of things to contend with, but in general it’s been a lot of fun today.”

Stoner said today continued his learning experience – his first true look at a street circuit a dramatic difference the now Queensland-based driver has experienced in his private testing at Queensland Raceway.

“It was a little bit different to begin with, going from a bike to a car, but you learn to run with it – that’s the edge of the track and that’s all you’ve got.

“There’s obviously still work to do and I’m not placing any expectations on the weekend, but I’m certainly having fun and looking forward to the race tomorrow.”

"He finished top-10 with plenty of experienced guys all around him and behind him. So he is in the thick of the action. He didn’t touch anything, he didn’t hit anything. He did a great job first run out and I’m sure he’ll be more relaxed now.”

The first V8 Supercar race of the season will be contested by the Dunlop V8 Supercars, set for 5:45pm local time.