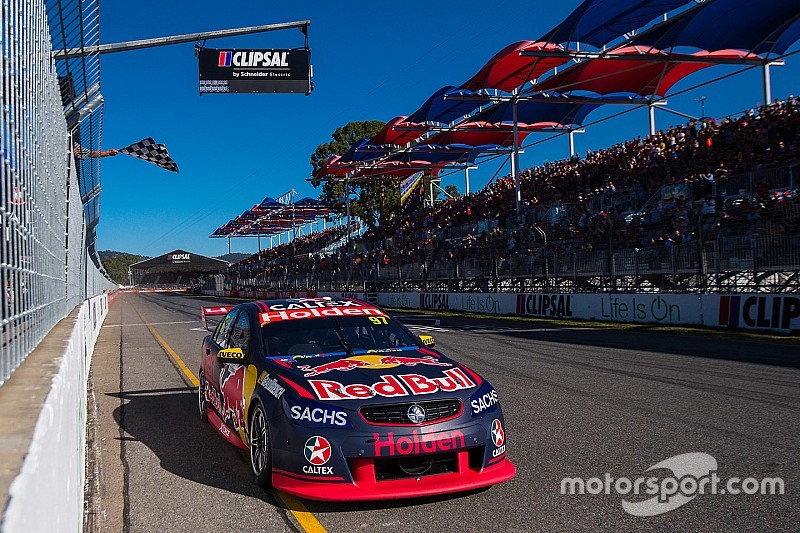 Shane van Gisbergen hunted down Scott McLaughlin to take a thrilling win in the second leg of the Clipsal 500.

The race boiled down to a thrilling battle between van Gisbergen and McLaughlin across the final stint, the Red Bull Holden closing in on McLaughlin and snatching the lead at Turn 9 with three laps to go.

McLaughlin looked speedy from the get-go, slotting in behind early leader Fabian Coulthard after the two DJR Team Penske Fords got past van Gisbergen on the run to the first corner.

Looking racier than his teammate, McLaughlin opted to make his first stop just eight laps in, smashing the lap record to the tune of half a second once back on track as he put in a stint that saw him in front when the first round of stops shook out.

After a long second stint he left more than five seconds down the road from van Gisbergen, who was left as his only genuine challenger after a mid-race scrap with James Courtney and Coulthard, when the second round of stops were completed.

From there he looked set to cruise to victory, but van Gisbergen had other ideas. The Saturday race winner slowly chipped away at the lead, before being handed the advantage when McLaughlin was given one last warning for kerb strikes 17 laps from the end, leaving him dangling on the edge of a pit lane penalty.

The penalty never came, but van Gisbergen did. He was within striking distance of the leading Ford with three laps to go, McLaughlin yielding to the pressure and running wide at Turn 9 to let van Gisbergen into the lead.

From there he could storm to a second win of the weekend. “What a feeling,” said van Gisbergen. "That race was very tough.

"In the middle I lost a lot of time battling James and Fabian. Then I had to run down Scotty. I could see him sliding, I was saving fuel… but what an awesome weekend.”

“I threw it away,” added McLaughlin. “Shane was fantastic, his car was very fast. I just didn’t quite have the pace in the last stint.”

Prodrive Racing’s Chaz Mostert finished the race third, dropping to the back of the top six with a long first stop before popping out in third after a short second stop.

While he didn’t have the pace to chase down the two leaders, he did have enough to comfortably hold off Courtney and Coulthard, who came home fourth and fifth respectively.

Courtney had his issues along the way, though, running into the back of Simona de Silvestro midway through the race.

Jamie Whincup fought his way up to sixth, knocking Waters back to seventh with six laps to go, before Tim Slade filtered the Prodrive Ford down another spot late in the race when he grabbed seventh for himself.

Todd Kelly and Craig Lowndes rounded out the Top 10. Nick Percat’s chances of replicating his 2016 Clipsal success were dashed on Lap 1.

The South Aussie whacked the wall at Turn 8 while running sixth on Lap 1, running down the escape road at nine before limping back to the pits for a lengthy repair.

He wound up as the race’s only DNF.