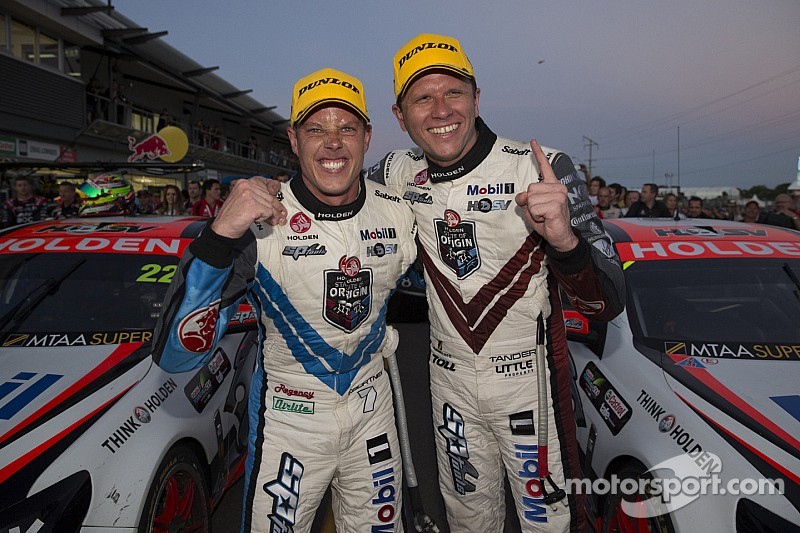 The HRT team could reach a very special milestone in the Bathurst 1000.

The HRT duo wants their Holden Commodore to be the 30th Holden victory on The Mountain.

The 2014 Bathurst 1000 is upon us and several teams have their eyes on the coveted Peter Brock trophy. More specifically, however, James Courtney and co-driver Greg Murphy of Holden Racing Team are looking to make Bathurst history this year. Should they achieve victory at the Supercheap Auto Bathurst 1000 this week in their Holden Commodore, it would be the 30th win for Holden at The Great Race.

Yes, all eyes are on Red Bull to carry the torch, but don't count out the HRT guys this weekend.

Murphy, a four-time Bathurst winner, is also looking towards The Mountain with redemption in his eyes after last year’s run which ended with a smash ... Literally.

On the opposite end is Courtney who has yet to stand on the top step at Bathurst in his nine years of racing V8 Supercars.

“Bathurst is a race that I’ve followed my whole life, and I would love to win it. I’ve been close a few times but haven’t stood on the top step yet," said James Courtney.

Then there's also Tander and Luff

Not surprisingly, fellow HRT driver, Garth Tander, and his co-driver, Warren Luff, are also looking to be the ones who will make history.

Tander, who has three Bathurst victories to his name, will make his 17th start on The Mountain this week. Despite his long history at Bathurst, Tander explains that The Mountain still commands a large amount of respect.

“This will be my 17th year going there and I still treat it with a huge amount of respect. You have to creep up on it – and that’s what makes it so special," said Garth Tander.

Looking to establish a permanent residence on the podium at Bathurst is Tander’s co-driver, Luff, who has been on the podium for the last two Bathurst races.

“To win the Supercheap Auto Bathurst 1000 with Garth and the Holden Racing team would be a dream come true in so many ways,” Luff said.

The blue ovals are lurking

However, in the sacred traditions of great rivalries, you can be sure that Ford has plans of their own to disrupt the Holden train which is running full steam at the moment.

Mark Winterbottom of Ford Performance Racing will be looking for a back-to-back victory at Bathurst while the young Scott Pye of Dick Johnson Racing, who was the only Ford driver in the top-five at Sandown, has his eyes on a possible podium finish or better.

One thing that’s for certain, however, is that the 2014 Supercheap Auto Bathurst 1000 will live up to its tradition as The Great Race and produce some exciting door-to-door racing action which you won’t want to miss.

Practice sessions for the 2014 Bathurst 1000 are set to begin on October 9th with the main race on Sunday, October 12th. For international viewers, be sure to check V8 SuperView for live streaming options.