Scott McLaughlin has become the first Supercars driver to win the elusive Darwin Triple Crown, thanks to a dominant performance in the 200-kilometre race at Hidden Valley. 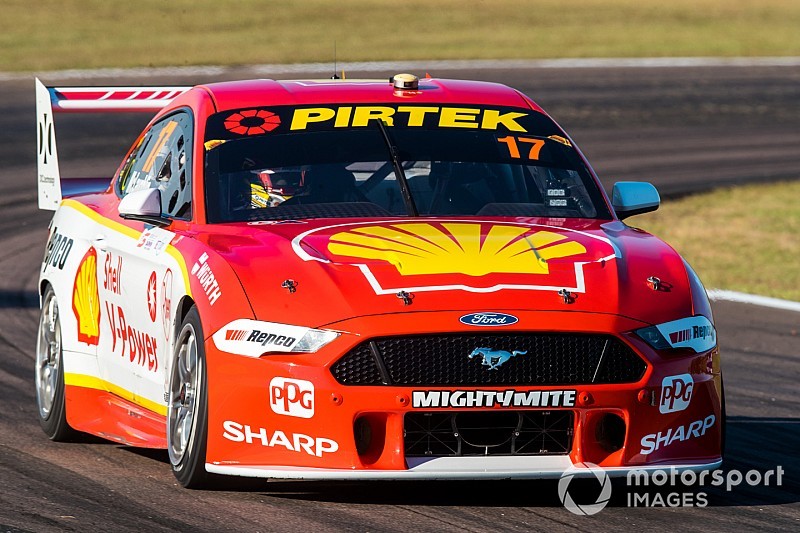 Having already won Saturday's 120-kilometre race, and then triumphed in today's Top 10 Shootout, McLaughlin just needed victory in the 200-kilometre finale to seal the Triple Crown.

The win is a slice of Supercars history for McLaughlin, the Triple Crown having never before been claimed in the 21-year history of the Darwin event.

McLaughlin only came under genuine pressure once throughout the entire 70-lap affair, a fast-starting Reynolds having a look down the inside of the polesitter at Turn 5 on the opening tour.

Having resisted that brief challenge, McLaughlin was able to quickly gap Reynolds and the rest of the field. His lead was over a second by Lap 4, over 4s by Lap 10, and out to 7.5s when he and Reynolds made their first stops on Lap 19.

With Reynolds going for a long first fuel stop, which dropped him back to sixth, the middle stint was a breeze for McLaughlin. He emerged a little over 5s clear of an early-stopping Cam Waters, that gap ballooning out to almost 10s by Lap 30.

McLaughlin went longer than the rest of the frontrunners in the middle of the race, not making his second stop until Lap 44, six laps later than the likes of Reynolds and Fabian Coulthard.

There was a nervous moment as he was almost released into the side of Jack Smith after making that second stop.

However the unsafe release was narrowly avoided, McLaughlin resuming with an 11s lead over Reynolds.

From there is was a straightforward run home for the reigning champion, his final advantage over Reynolds 13.8s.

“It’s an awesome thing for all our guys and girls at Shell V-Power Racing, Ford Performance, to be the first to win the Triple Crown is really cool,” he said.

“I’ve got a great car, great team, the pitstops were unreal. I had a good battle with Fabs at the start.

Reynolds triumphed in the battle for second thanks to a shorter second stop. Having taken the pain at the end of the first stint, he was able to jump Coulthard and Waters second time around.

Coulthard used a similar trick to get ahead of Waters, who had to settle for fourth after running second in the middle stint.

He could have even fell further back, with Jamie Whincup and Chaz Mostert right under his rear wing at the finish.

For Whincup it was a rollercoaster of a race; he found himself running 23rd on the opening lap after a clash with James Courtney sent him wide. He used a big undercut with a first stop on Lap 14 to get back in the game, setting him up for an impressive fifth.

Mostert, meanwhile, went the other way with strategy, not making his second stop until the window was about to close on Lap 57. He was then able to charge home to sixth, just behind Whincup and just ahead of Tickford teammate Lee Holdsworth.

Anton De Pasquale and Will Davison finished eighth and ninth, with Shane van Gisbergen rounding out the Top 10.

McLaughlin now has more than a round's worth of points up his sleeve, with a 319-point advantage over Coulthard.