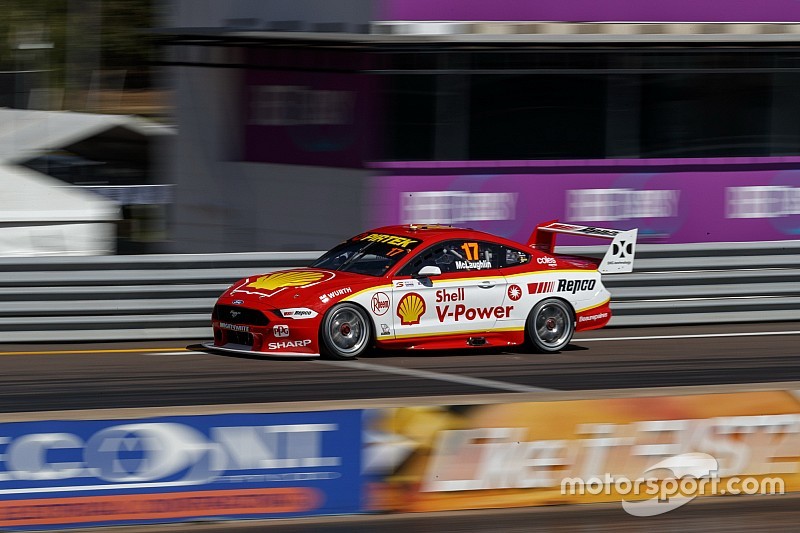 Scott McLaughlin went under his own unofficial lap record to secure provisional pole at Hidden Valley, while both Triple Eight drivers missed out on a spot in the Top 10 Shootout.

McLaughlin and David Reynolds both made a lightning quick start to the 20-minute session, the pair setting a 1m06.031s and 1m06.039s respectively on their first flying laps.

Their timing was impeccable, those laps coming seconds before the session was red flagged thanks to a pair of Brad Jones Racing Commodores hitting the Turn 10 wall.

It was Nick Percat that went off first, a suspected brake failure sending him head-on into the earth bank.

He was immediately joined by teammate Macauley Jones, who lost the rear of his Holden in an entirely unrelated incident and went into the same wall backwards.

When the session finally resumed the top two were immediately at it again, McLaughlin lowering the benchmark to a 1m06.011s.

But it was Reynolds that got the best of a brief moment of cloud cover, breaking the 1m06s barrier for the first time all weekend with a 1m05.759s.

Satisfied that his time was good enough for the Top 10, Reynolds was out of his car with nine minutes to go.

McLaughlin, however, wasn't done. He returned for a final crack at Reynolds time right as the clouds returned with a couple of minutes to go, storming to provisional pole with a lap record-shattering 1m05.473s.

Reynolds' time was good enough for second, with Chaz Mostert also dipping into the 'fives' with a 1m05.989s on his last run.

Rick Kelly was best of the Nissans in fourth, followed by Tickford pair Cam Waters and Will Davison.

Anton De Pasquale was seventh, Mark Winterbottom the best of the Triple Eight-build Holdens in eighth, Fabian Coulthard ninth, and Lee Holdsworth the final driver to bank a Shootout spot in 10th.

Surprisingly there will be no Red Bull Holdens in the single-lap dash, both Jamie Whincup and Shane van Gisbergen missing out on the Top 10.

Seven-time champ Whincup was 11th, missing the cut-off for the Shootout by 0.02s, while van Gisbergen was left way down in 16th.