Once again the V8 Supercars Australia put on quite the show and today was no different when Will Davison put the moves on Garth Tander to take the lead on lap 2 at Homebush.

Although Ford Performance Racing’s Will Davison in the Trading Post Falcon took the final race of the V8 Supercar Championship around the streets of Homebush his close friend Jamie Whincup finally celebrated winning the 2012 title, having put it on ice since securing it at Winton Raceway a fortnight ago.

Davison who has led at Sydney in the past only to fall short finally managed to avoid any carnage to grab his first win around the streets of the 2000 Olympic precinct. With an early safety car Davison was able to make a move on Garth Tander in the Holden Racing Team Commodore which effectively kept him at the front of the field for most of the race. Whilst out in front Davison kept yesterday’s winner Craig Lowndes in the Team Vodafone Holden some 4 seconds in arrears with James Courtney in the second Holden Racing Team Commodore back in 3rd. 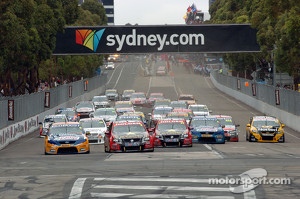 Davison said, “I was able to set up a good battle, I didn’t make any mistakes and enjoyed every lap. It was a great send off. As I said yesterday, ‘this is my second favourite track behind Bathurst and it was great to finally win a race here’.” This was Davison’s 8th win of the season and the 33rd consecutive win between Team Vodafone and Ford Performance Racing who have shown that they are the two teams that the rest of the field has to replicate. Davison echoed that by saying, “It’s been great that both teams have been able to achieve this”

Craig Lowndes was able to secure 2nd in the championship creating a repeat of last year’s results which is a credit to Team Vodafone who paid tribute to their major sponsor with a helicopter circling above with THANKS FOR THE MEMORIES. Lowndes said, “the pace was incredibly quick but once the race settled down the car went better and faster and I was able to close the gap. Will was 4 seconds up the road and I was able to narrow it to two”

James Courtney was able to manage to put back to back podiums this weekend, something he hasn’t done since 2010 when he won his first title. He admitted, “The car was better yesterday than today. Before the weekend if it was suggested that I would end up on the podium twice I would have said you were joking”. Courtney admitted that his season has been disappointing but like some of the other leading teams he is looking at hitting the ground running in 2013. 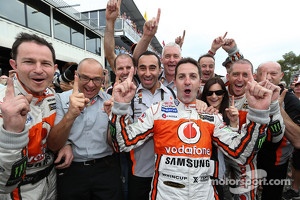 Although Ford and Holden shared the spoils this weekend with a win between them Holden fans cheered the most when Whincup was presented with his title silverware. The now four time winner said, “It’s an unbelievable feeling. I was happy with one championship but to sit here with four is indescribable”. He thanked his team, “They have worked incredibly hard this year, with this (championship) and the Car of the Future for next year they have all contributed and I have to thank them. To secure another 1, 2 was to focus and we achieved that”.

Although the curtain fell on the Ford versus Holden battle, which has been billed as The End of an Era, spare a thought for Ford’s SP Tools driver Shane Van Gisbergen who DNF both races this weekend. Yesterday he broke his steering and collided with the Medical Car on lap 1 and today his clutch went on the same lap. The Kiwi who debuted in 2007 is terminating his short career due to personal reasons.

Team Fujitsi driver Alexandre Premat who suffered heat exhaustion yesterday decided not to take part in today’s race and development driver Scott McLaughlin, who had early taken his own championship drove the #33 car to a credible 17th.