Will Davison has claimed his second race win of the V8 Supercars Championship at Symmons Plains, leading home Ford Performance Racing teammate Mark Winterbottom in Race 3 of the title chase.

The win was Davison's first in V8 Supercars in Tasmania and the eighth of his career, also extending his title lead over Jamie Whincup to 39 points.

Another 1-2 for FPR is really important for our team.

"Another 1-2 for FPR is really important for our team. We just have to keeping building on this. All my guys have done an amazing job. It's never fun battling with your teammate, you have to be so careful."

Said Winterbottom: "I just can't get off the line, but the car's quick. I caught him but there would have been panel damage, but it's good.

"The bad ankle is hurting me off the line and I just can't control it and get a good start."

"The podium is always good, but we didn't quite have the pace. We'll fight on," said Whincup.

The 59-lap race saw all but two cars start on the hard tyre with both types to be used in the race.

In the end, no one had the answers to stop the two FPR Falcons from running up front. 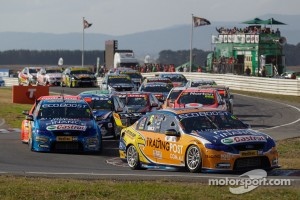 Team iSelect's Taz Douglas ended up finishing 12th - a personal best - after running in the top 10 for the majority of the race.

It was another day of disaster for 2010 champion James Courtney. He and Rick Kelly clashed on the first lap and the duo spun to the rear of the field.

Courtney recovered to 18th with Kelly 19th, though the incident will be investigated by Race Control post-race.

A total of 17 cars finished on the lead lap on the tight 2.4-kilometre circuit, with a longer race to be held tomorrow over 84 laps (200 kilometres).

There will be a practice session tomorrow ahead of another 20-minute qualifying session that will determine the grid for tomorrow afternoon's fourth race of the 2012 title chase.