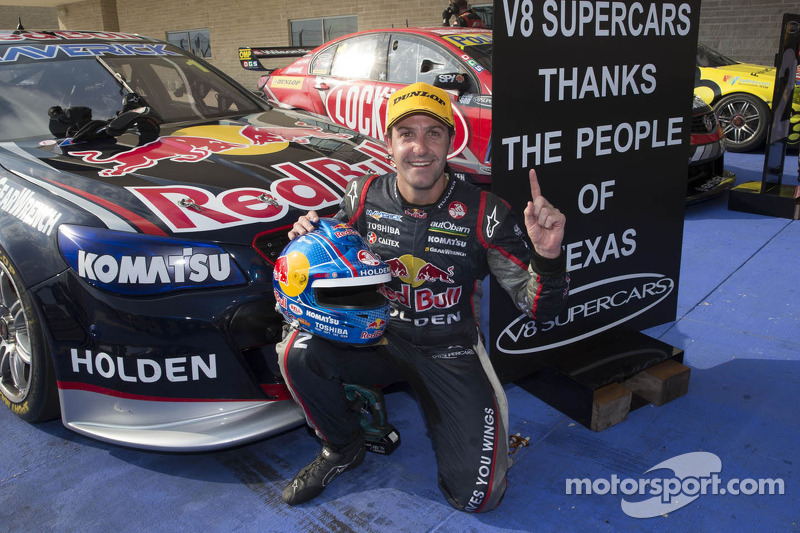 Last weekend's inaugural Austin 400 at the Circuit of The Americas has left a lasting impression on both the fans of V8 Supercars in the USA and the visiting Australian teams as well.

Nearly 69,000 fans attended the inaugural event which is being hailed the most successful V8 Supercar event ever staged outside of Australia or New Zealand.

Four-time series champion Jamie Whincup dominated proceedings by taking three of the four race wins while Fabian Coulthard was successful in the opening race on Sunday.

With the first event completed, V8 Supercars and Circuit of The Americas have begun preliminary discussions on new and innovative ideas for the 2014 race to deliver an even better spectacle – on and off track – than last weekend’s highly successful event in Austin. 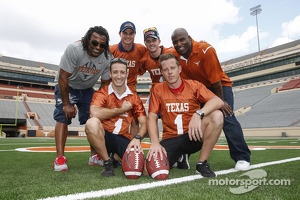 While a slow pit stop thwarted Mark Winterbottom's chances of success during the weekend, the Pepsi Max Crew FPR driver was still thrilled with the category's debut on US soil.

Winterbottom (was the first Australian V8 Supercar star to visit the circuit while still under construction last year and is now eagerly awaiting the chance to return in 2014.

“The Austin 400 exceeded all of my expectations, the circuit is first class and the hospitality of the people of Austin and the Circuit of The Americas made us feel more than welcome," Winterbottom said.

"The accessibility for fans attending the event was also very unique and it was great to meet so many fans from Texas and all over Australia and the world.

“There is no doubt in my mind that the event was a success and I hope that it paves the way for a long future for this event. The circuit layout was challenging and the weather also made it a very physical event.

“In my opinion the city of Austin is a hidden treasure. It is a place where I would like to bring my family for a holiday as it is so unique – a real hidden treasure. I have been very impressed with it and the genuine warmth of the people of Austin. 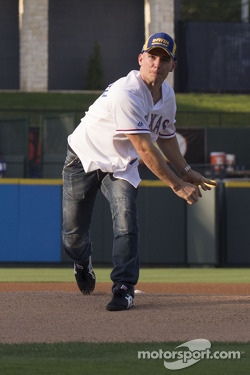 “It goes without saying that I highly recommend more V8 Supercar fans to make the trip to the USA to enjoy the Austin 400 and to stay for a holiday. There is a lot to enjoy here and all around Texas and beyond."

Mercedes-Benz AMG driver Lee Holdsworth was equally impressed. The Irwin Racing driver arrived in Austin early and actually threw out the first pitch for the local Triple A baseball team - the Round Rock Express.

"I thought the Austin 400 was an amazing thing for the sport and V8 Supercars should be really proud," Holdsworth said.

"The Austin people loved it and people came from all over America. I was also really surprised with the number of people who came over from Australia.

"To have nearly 69,000 people attend the event is a really impressive number and obviously V8 Supercars has a huge following on SPEED on television here in the US.

"The fans knew us, knew our names - it was a really fun week. Austin is a great city and everybody who made the trip really enjoyed it."

Jack Daniels Racing Nissan driver Rick Kelly was equally as impressed with the Austin 400 weekend. Both Rick and Todd Kelly headed to the USA early to visit the home of Jack Daniels in Tennessee as well as the Nissan Altima plant in nearby Smyrna, Tennessee.

"The Austin event was a terrific success. The V8 Supercars have raced at a number of international venues in the past few years, but none of them have been as successful as this one," said Kelly (pictured right).

"It's a long way for us to go for a motor race, but it was well worth it and we can't wait to get back there next year." 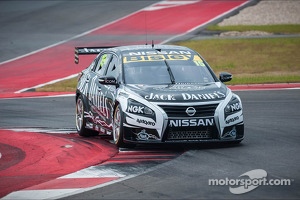 "The reaction from the fans was amazing. They were all very knowledgable about V8 Supercars and extremely interested in our race cars," said Kelly.

"Our Nissan Altimas were a hit in particular. No one over in the USA knows what a Holden Commodore or Ford Falcon is, but an Altima is every third car that drives past you on the road. We got so many questions about them, so it really felt like we were the 'home' team in some ways.

"This has instantly become one of the must-do V8 Supercars events.

"They estimated that there were somewhere between 2000-4000 Australians in Austin over the weekend. Once all of those people go back to Australia and tell their mates, they'll be saving up for it now. We could have 10,000 Australians there next year. How awesome would that be?"

Circuit of The Americas is quickly building a reputation as the home of major world championship class motorsport in the US. After hosting the US Formula 1 Grand Prix for the first time last year, the track has added V8 Supercars and World Championship events for MotoGP and the World Endurance Championship for Le Mans-style sportscars in 2013.

“Anytime we introduce a new product in the marketplace it is going to take some time to build awareness and take time to develop personalities,” Circuit of The Americas, President and CEO, Steve Sexton said.

“But the personalities in V8s, the drivers are incredible, and as we go through the years we will have the opportunity to build on that.

Judging from the comments on the Circuit of The Americas Facebook page, it appears the American fans were thrilled at the open paddock access provided to all fans over the weekend in Austin. 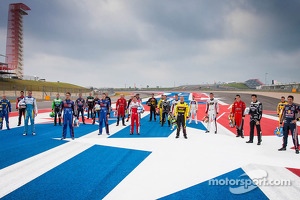 "Open paddocks for the entire weekend - great to be able to wander through, chat with the teams, and look at what they're up to whenever there was a break on the track."

"the whole weeked was awesome.. the pit walk, and the very approachable teams, who were open to chit chat.. and answering all questions.. while they were working.. amazing.."

"Pit access was fantastic - chatted to mechanics, tire guys & even a team owner."

Approximately nine percent of fans who purchased Austin 400 tickets in advance of the race came from Australia to watch their V8 Supercar heroes compete under the red-hot Texas sun. Circuit of The Americas sold tickets to the event in more than 30 states, including Texas.

The series race cars and equipment are set to arrive back in Australia today this week as teams prepare for the next round of the series - the SKYCITY Triple Crown at Hidden Valley raceway in Darwin, Northern Territory from June 14 to 16.

Nissan Motorsport ready for the heat in Darwin