Despite the loss of one of the valued Racing Entitlements Contracts (RECs) under which it currently runs the Team Norton DJR entry in the V8 Supercars championship, Dick Johnson Racing has pledged to return with another four-car effort in 2013.

The REC under which the team currently runs James Moffat in the Norton-sponsored Ford Falcon is being recalled by owner Charlie Schwerkolt and moved to Ford Performance Racing next year. Moffat, who is the son of four-time Bathurst champion Allan Moffat, is struggling through a tough year and is 28th in the series point standings.

“We continue to review our options for next year and beyond, but are intent on continuing to operate as a four-car team, based out of the Dick Johnson Racing headquarters in Stapylton, Queensland,” said team owner and principal Dick Johnson. “Against all the odds, we’ve been here for over 30 years and we intend to be here for a whole lot longer.” 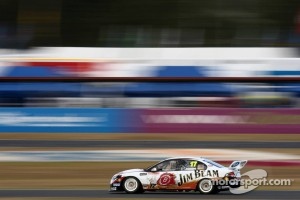 The former Bathurst winner and long-time V8 Supercar campaigner also announced a new sponsorship deal with Melbourne company Grinders Coffee, which will support the team with its new Fix Coffee brand. The four-car team is seeking its first top-five finish of the year, with Steve Owen’s sixth-place run at Hamilton serving as the team’s high-water mark. Johnson’s son Steven is currently leads the team in points, holding down the 14th spot in the championship.

Greg Murphy to undergo further back surgery next week

‘Legends Lane’ to be built at Mount Panorama