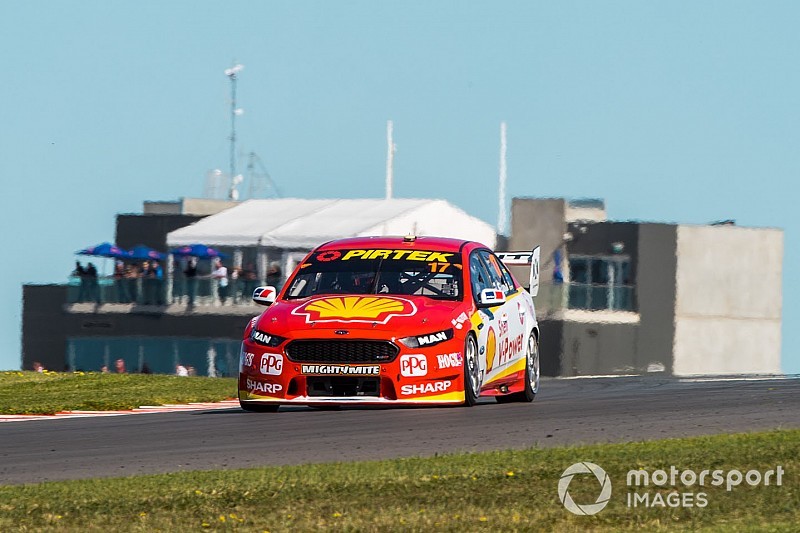 DJR Team Penske managing director Ryan Story says his team is embarrassed by the three-week-old mistake that has led to a stewards inquiry at Sandown.

The hangover of a minor technical breach at The Bend last month has led to the team being controversially summoned to the stewards for a hearing tonight.

The hearing will determine if the team should be penalised for running an ineligible drop gear in Scott McLaughlin's car during qualifying for Saturday's race in South Australia, an issue that stems back to an incorrectly marked transaxle unit.

The team accidentally fitted the unit with the wrong gear to McLaughlin's car ahead of the session three weeks ago, an error that was spotted and corrected immediately afterwards.

While technically a breach of the rules, running the shorter gearing was more likely to have hindered McLaughlin in the session rather than provided any performance gain – highlighted by the series' form qualifier being just 10th quickest.

"It's an ignominious mistake. It's clear from the result that we gained no advantage, and we will await the decision from Supercars."

While the series was aware of the breach, no official action was taken at the time. It was initially thought that the team was being let off, however tonight's hearing now opens the door for penalties to be applied.

A statement from Supercars read: “The Supercars Technical Department found an alleged breach of Rule C10.4 following the OTR SuperSprint at Tailem Bend, which was not detected during the spot check scrutineering process.

“The alleged breach was discovered post-race during a routine review of ECU data taken from all cars, which is analysed at and after every race meeting.

“The Supercars Sporting and Technical Director contacted the Authorised Representative of DJRTP to discuss the alleged breach. The Team advised it had changed the transaxle in Car 17 the previous evening and the replacement transaxle had an incorrect drop gear ratio. The Team then changed the drop gear to the correct ratio post Qualifying.

“It should be noted at no point during the Qualifying session or during post Qualifying Parc Ferme did any Team allege a breach or protest the results of Qualifying.

“As is standard procedure for technical matters and alleged breaches found away from a race meeting, any such matter is referred to the Stewards the next time they convene, which in this case is the Sandown 500 in Melbourne.”