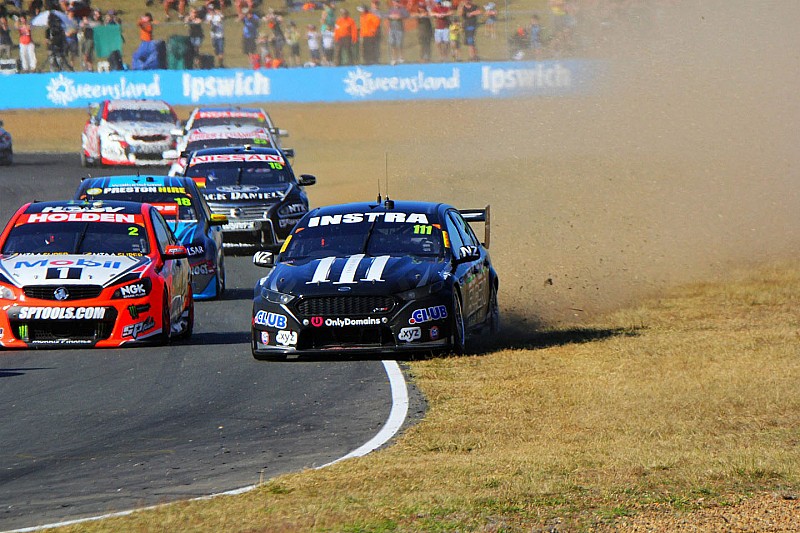 It’s not easy being a rookie in the V8 Supercars field… and Andre Heimgartner found that out the hard way at Queensland Raceway.

He’s in a Prodrive car, and they’re very quick at the moment. So when he does a good job in qualifying, it makes sense that he ends up somewhere near the front.

But when the racing starts, some of the serious operators are playing hard ball. I guess a part of that is that they don’t like somebody coming into the championship and qualifying in front of them like that.

I think Andre has to sacrifice a couple of races by standing his ground and let the more experienced drivers know that he’s not going to be pushed around. At the moment he makes it too easy for the rest of the field to shuffle him back, and by Lap 2 or 3 he’s gone from the front to 15th or something like that.

He was on the wrong end of too many battles over the weekend, and of course it’s difficult when you’re inexperienced, and you’re up against guys like Garth Tander that are hard racers.

But for Andre to make that next step, he’s going to need to stand his ground and give them a shove back every now and then.

Todd fills up the swear jar

Todd Kelly takes on so much more than most drivers do with his team.

He leads the direction of the team, he’s on the tools in the workshop, he’s involved in every aspect of the team – including financially.

At QR, he got very emotional when the engine let go. My guess is that he was sitting there thinking ‘I’m the guy down the engine shop every day, and then I’m copping the worst of the bad luck’.

What his reaction showed is how passionate he is about the sport. He’s not just having a bit of fun; if he was just mucking around, he wouldn’t care so much.

I thought it was great to see. His outburst made some headlines, but to me it shows how much dedication and passion goes into his job of running that race team, and how much he takes it to heart.

For somebody who has been racing that long, I find it incredible he still has that fire in his belly.

As Mark Skaife would put it, Craig Lowndes, Shane van Gisbergen, and Chaz Mostert are three guys that are operating at a very high level.

That was on display in all its glory during Saturday’s first race. They were giving each other little nudges to let each other know they were there, but there was never a moment where someone made a big lunge and went spearing into someone else’s door.

I thought it was awesome to watch, I really enjoyed that. You could see the smile on van Gisbergen’s face at the end of the race – even though he missed out on the podium! That says a heck of a lot.

When you get a bit further down the grid, you don’t see battles like that…

Insights with Rick Kelly: Time to lead Team Australia in the UK