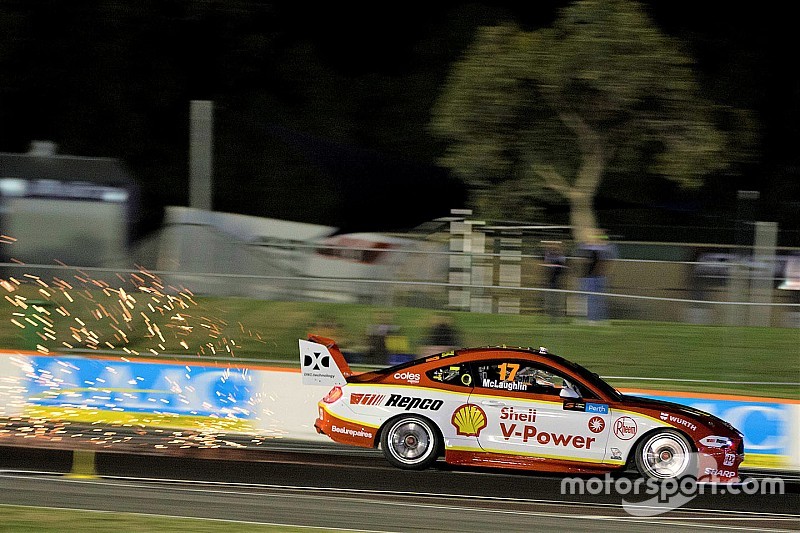 Top Supercars drivers have labelled a combination of a new track surface and night time running in Perth as "nuts" and likened it to driving a go-kart.

The 25-car Supercars field hit the Barbagallo Raceway circuit for the first time under lights tonight with a 30-minute practice session, which also marked the first running on a brand new track surface.

The result was record-smashing pace, Jamie Whincup's 53.443s now the fastest ever Supercars lap at the venue, while every car in the field bettered the existing practice record set by Scott McLaughlin back in 2017.

The new level of grip, combined with running under lights, left drivers deeply impressed, Whincup likening the experience to driving a go-kart.

"Very intense out there," he said.

"The lights are good, they've done a very good job at lighting the track up, but it's still dark. You've still got no idea who is behind you, you come up over the crest and you think a car is following you but it's actually just one of the light posts shining on the track.

"And then with the resurfacing it's a massive amount of grip. The laps are intense. It's like being in a go-kart, just the grip and the entry speed you carry in and the corner speed."

The seven-time series champ added that there is zero chance of a repeat of the Barbagallo races of old, where conserving tyres was key.

"Where you see most of the field cruising around at 30 per cent, looking after the tyres and trying to make them get to the end, there will be none of that," he said.

"It will be flat-stick the whole way."

Tickford Mustang driver Will Davison echoed Whincup's thoughts, claiming it was difficult to give his race engineer feedback given how much grip there was.

"It was pretty nuts," he said.

"On the first few laps the engineer was straight in the door, 'what's the balance, what do you need to change?' And you just laugh at him and say 'mate, I'm just hanging on out here. The car is doing everything right, I've just got to get to the limit of the car'.

"Like anything at night it's sort of magnified, it felt like you're on fast forward on the PlayStation. You had to adapt your lines and quite a bit of stuff from previous years here. You can certainly attack the corners in a couple of very different ways.

"It's all a bit backwards to what we do at most events; the grip level and technique and driving the car was fun."

Davison's teammate Chaz Mostert, meanwhile, joked that he enjoyed the late start to the day's running.

"I wish we could do all of our racing as night racing, because I actually had time to play nine holes of golf today. That was fantastic," he said.

"I think about the old Calder Park days where you used to watch the main straight lit up, but the rest was pretty dark. I actually kind of like that there is some patches out there, I think it's old school.