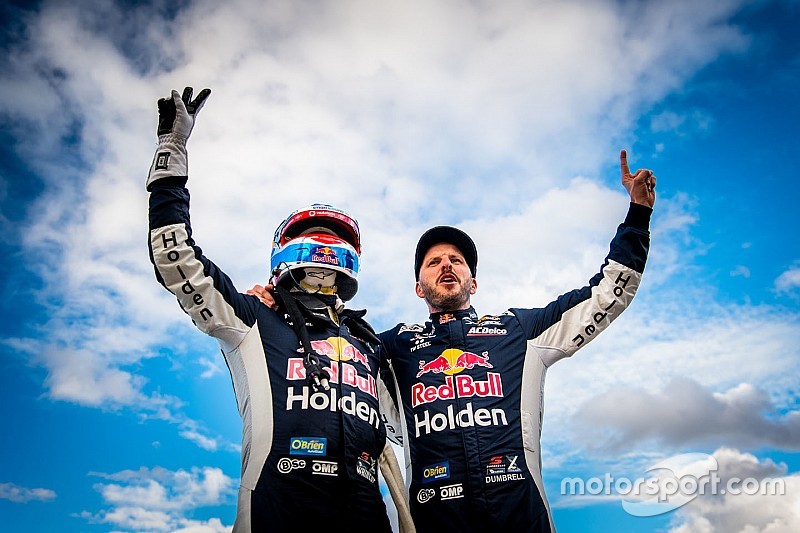 Paul Dumbrell admits that he may have made his final Bathurst 1000, as he faces uncertainty over whether he’ll be able to continue alongside Jamie Whincup at Triple Eight next year.

Having partnered Whincup for the last seven enduro campaigns, the pair could well be split next up next year thanks to Craig Lowndes scaling back to a co-driver role.

Should Triple Eight opt to pair Lowndes and Whincup, Dumbrell would either need to move across the garage to van Gisbergen’s car, or look elsewhere for a co-driver gig.

A move outside of the T8 set-up is thought to be highly unlikely, and while he’s not ruled out partnering van Gisbergen in the other Red Bull Holden the odds seemed stacked in a favour of Dumbrell taking a Whincup-or-bust approach.

“It is what it is,” said Dumbrell after Sunday’s race.

“We’ll sit down, [Roland Dane] and I, as we always do after Gold Coast, and make the call. But it could be the last time.

“Jamie and I, seven years together, we’ve got a good partnership.

“I’ve always been very clear, I’m here for a short time, not a long time, so if it ends up being the end, so be it. I’ll go and find something else to do.”

Dumbrell has raced at Bathurst every year since 1999, shifting to Triple Eight after retiring as a full-time driver at the end of the 2011 season.

Dumbrell and Whincup won the Bathurst 1000 first time out in 2012, but since then have endured a run of misfortune. Highlights of the remarkable series of near-misses include running out of fuel on the last lap in 2014, Whincup passing the Safety Car in 2015, and the infamous shunt between Whincup, Scott McLaughlin, and Garth Tander in 2016.

Adding to the pair’s woes was this year’s bizarre wheel failure, right as they were in a position to take control of the race.

According to Dumbrell, those missed opportunities make the 2012 win even more special.

“Outside of one year we’ve come here and been one of the most competitive, if not the number one,” said Dumbrell.

“We’ve done a fair bit for the TV ratings. We just don’t have the trophies to show for it.

“But that’s Bathurst. It doesn’t owe us anything and we all owe it something.”

The latest Bathurst blunder came while Dumbrell was in the #1 Red Bull Holden, a loose wheel but leading to the right front parting ways with the car on Lap 40.

It happened as Dumbrell was running second, and looking like he was set to size up leader Luke Youlden.

“I had a long brake pedal into the Chase, but I got the brake pedal back up, halfway through the stop,” he explained.

“Then down the main straight, I saw it depart the car and pass me, so I knew we were in a bit of trouble.”

Lowndes gets new backing for New Zealand Supercars round

How Triple Eight could keep both its Bathurst winners