Even a week after Marcos Ambrose took the red flag and the V8 Supercar Championship Series for 2003, the controversy continues to rage throughout the motorsport world over the Skaife/Ingall incident at Eastern Creek during the final race of the ...

Even a week after Marcos Ambrose took the red flag and the V8 Supercar Championship Series for 2003, the controversy continues to rage throughout the motorsport world over the Skaife/Ingall incident at Eastern Creek during the final race of the season. 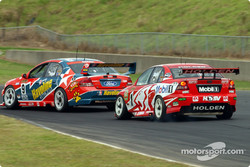 The Enforcer Russell Ingall keeping Mark Skaife at bay.
Photo by John Maricic.
No love has been lost between these two over the years, and this seemed to escalate even further once Ingall defected to Ford and Stone Bros Racing at the end of the 2002 season, and continued to remain the same today.

The catalyst came when both drivers banged doors down the back straight, resulting in Skaife spinning and slamming the concrete wall. A lap later, much to the dismay of officials and fans, Ingall veered towards the Holden driver momentarily, then continued racing.

That night, CAMS, the governing body for motorsport in Australia convened and handed down penalties for both drivers. Skaife was fined $10,000 while Ingall copped $15,000. Both lost points for the round, but at the end of the day that means little. They were placed on suspended sentences for three rounds, so if they manage to keep their noses clean, that's the end of it.

Laying the blame at the feet of each other, both appealed with Ingall having his fine reduced by $5,000. Skaife presented fresh evidence and his matter has been adjourned to another date. After leaving the hearing he was asked whether this had ruined their friendship. There are no points for guessing what the response was.

With AVESCO celebrating it's 10th anniversary of V8 Supercars, this was hardly the advertising they were looking for or envisaged. The finale at Eastern Creek, billed as the Main Event, left Two Men Feuding, rather than One Man Standing. 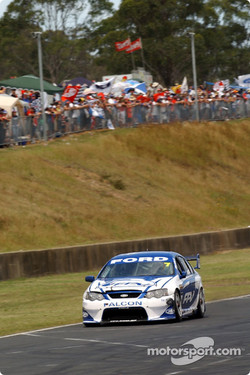 David Besnard’s last race with FPR.
Photo by John Maricic.
Despite a great season that came down to the wire, some drivers will be sitting on the sidelines come 2004. Already David Besnard has been terminated by Ford Performance Racing, who opted for a two-car team next year, saying it was logistically impossible to manage three.

Dean Canto, who has managed some top 10 finishes of late vacates his seat at Triple Eight Racing, who retain Paul Radisich and re-sign Max Wilson from Dick Johnson Racing. Warren Luff slides into that seat as the number two driver while Cameron McConville slots into Jamie Whincup's spot at Garry Rogers Motorsport.

The Rookie has had a disappointing year, and perhaps ventured into the big league a year or two early. The coup of the season went to Orrcon Racing who have Mark Winterbottom on board after team boss Mark Larkham decided it was time to concentrate on the management of the outfit.