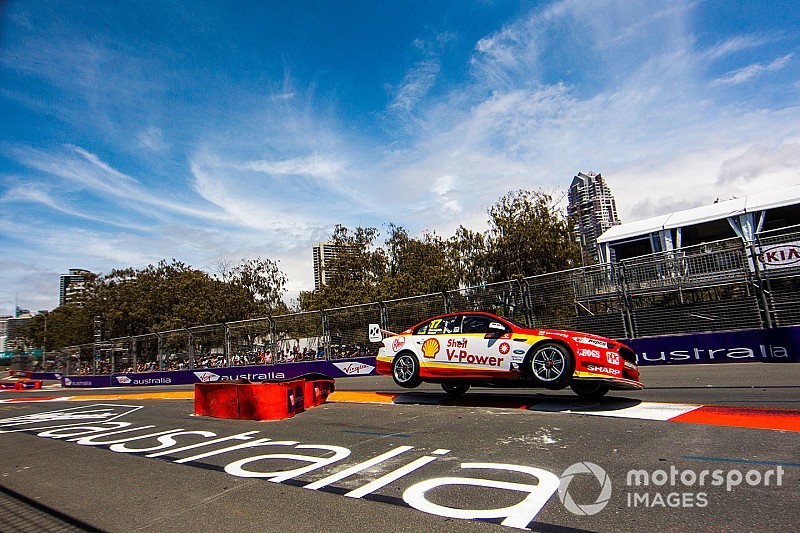 The Supercars title contenders will start the first leg of the Gold Coast 600 from opposite ends of the Top 10, with Scott McLaughlin on pole and Shane van Gisbergen on the fifth row after a kerb strike in the Shootout.

That helped him jump both Jamie Whincup and David Reynolds, who couldn't match McLaughlin's time, before provisional polesitter van Gisbergen took himself out of the running by jumping a kerb at the Beach Chicane and having his time wiped.

That means McLaughlin will start today's 300-kilometre race from pole, while van Gisbergen will start way back in ninth.

“I felt we could have done it in that first qualifying and just didn’t put the lap together, but to do it in the Shootout is fantastic,” said McLaughlin.

“It’s a great prize, obviously, being on pole, but we need to do it in the race. We’ll give it a good hard crack.”

Despite losing nine spots thanks to the kerb strike, van Gisbergen was philosophical about the Shootout result.

“I just pushed too much. It’s a shame, the first sector I mucked up and was just trying to make it back,” he said.

Whincup and Reynolds will start second and third, van Gisbergen's disqualification meaning they matched their regular qualifying efforts despite being beaten by McLaughlin.

Fabian Coulthard will start on the outside of the second row, two spots better than qualifying thanks not just to van Gisbergen's drama, but James Courtney's kerb strike earlier in the Shootout.

Chaz Mostert, Michael Caruso, Nick Percat, and Cam Waters all made up two spots as well, while Courtney will join van Gisbergen on the fifth row after overstepping the mark in the chicane.

“They’re joking with all those hop things aren’t they?" said Courtney after being told he'd been disqualified.

"It just ruins it for everyone. There’s better systems.”