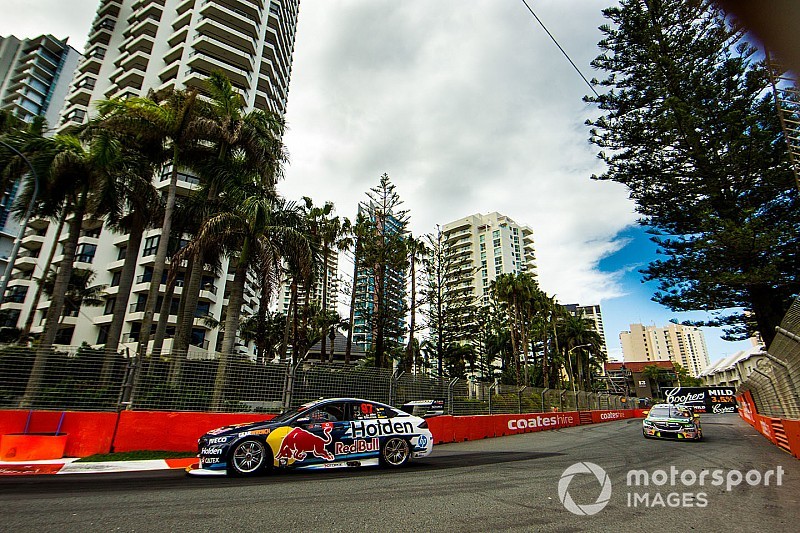 Shane van Gisbergen has secured provisional pole for Saturday's leg of the Gold Coast 600, while Craig Lowndes will start outside the Top 20 thanks to a penalty for running into Richie Stanaway

That means the pair will run at the end of this morning's Top 10 Shootout, which will set the first five rows of the grid for the opening 300-kilometre race.

The likes of Scott McLaughlin, van Gisbergen, and Reynolds all improved around the same time to close the gap to within a tenth, before Reynolds took over top spot with a 1m10.422s with seven minutes to go.

Confident that time would be good enough for the Top 10, Reynolds opted to jump out of his car and save a set of tyres for the Shootout.

And that meant the Red Bulls had a clear run at pipping him to provisional pole, van Gisbergen and Whincup having waited on their second set of rubber for the dying seconds of the session.

“The car has been good and we managed to do it on two sets of tyres,” said van Gisbergen.

“We’ve got another new set for the Shootout and then a spare set for tomorrow if we need it.

“It’s a fine line around here, I got a kerb strike on my first lap on the first run, which just dents your confidence because you don’t know where the limit is.

“Then I had to build up throughout the laps, and you’ve got the walls as well, so there’s a couple of scrapes, but we got the time done.”

Reynolds and McLaughlin finished up third and fourth respectively, while James Courtney jumped from 10th – and right on the Shootout bubble – to the safety of fifth on his final run.

An early time from Fabian Coulthard left him sixth, while Chaz Mostert, Michael Caruso, Nick Percat, and Cam Waters all round time on their final runs to book Shootout spots.

Rick Kelly was the unlucky man to just miss out on a berth in the single-lap dash, finishing up 11th.

Craig Lowndes finished well off his Triple Eight teammates thanks to a bizarre clash with Richie Stanaway at the end of the session.

The Tickford driver was on a flying lap when he came across the Bathurst winner warming his tyres by weaving across the width of the track.

Stanaway was left with nowhere to go and slammed into the back of the T8 Holden.

Lowndes was slapped with a five-place grid penalty, and will start the race down in 21st.

“It’s one of those things. We all talk about traffic around here and I was one of them today, unfortunately,” said Lowndes.

“We went out for that run, I was looking in the rear-vision mirrors, all I could see was [Jack] Le Brocq behind me and all of a sudden he disappeared and Richie came on the scene.

“I’ll go up and apologise to him, it was my mistake, I should have got out of his way, but by the same token it’s difficult to get out of the way here.

“There was zero information [from my team], I was just told I was going out with the train, expecting everyone to be on the same programme."