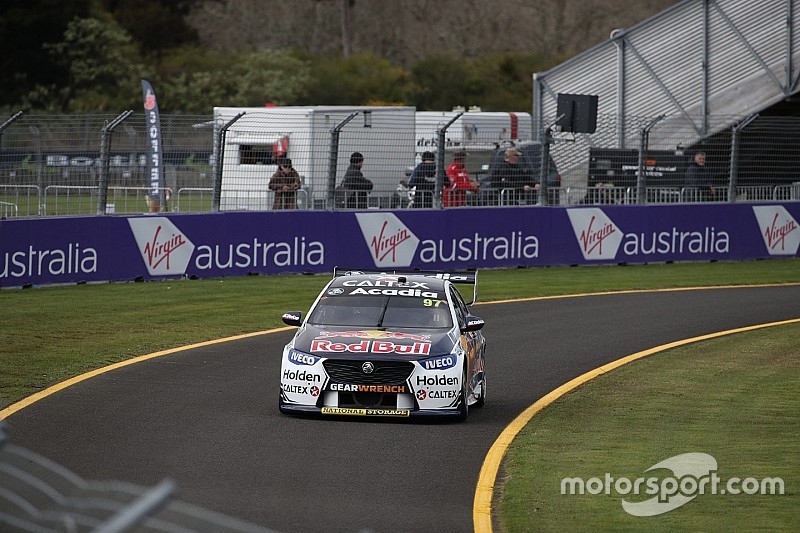 Supercars had to give Triple Eight a special airline luggage allowance to ensure the parts for the Holden aero update would make it to New Zealand on time.

The category green-lit another round of aero changes for the Holden a little over a week ago, with changes to the front under tray, the deletion of a tail light bracket, and a more aggressive Gurney flap on the boot lid all part of the new package.

However, with a relatively short turnaround from The Bend, Triple Eight was unable to have all of the 3D-printed Gurney flap parts finished in time to distribute to teams pre-Pukekohe.

That meant the parts were carried over by Triple Eight team manager Mark Dutton as ordinary checked luggage, something Supercars itself had to approve.

"We cleared it with the category to have allowance, basically there was two cardboard boxes with ‘fragile’ taped onto it.

"I was holding my breath until they came out the other end, because that was all of the parts in existence.

"If they had have been lost in transit that would have been pretty stressful, but they weren’t."

Having been fitted to the Commodores in the field yesterday, the new package was used in anger for the first time during today's two practice sessions.

Ford Mustangs still topped both sessions, however Shane van Gisbergen did get within two tenths of Practice 2 pacesetter Lee Holdsworth.

According to Dutton there is confidence that the desired outcome, an overall increase in downforce, has been met.

Now the Holden teams will need to try and tune out high-speed understeer, a byproduct of the car now making more rear grip.

"Practice 1 we didn’t learn a lot just with the weather, although we did notice the rear had better stability, but still battling with high-speed understeer," he said.

"We’ve got to see how much of that is just balancing the aero changes. It is balancing it, but how much we can get a good balance in a high downforce mode.

"You still see the Mustangs are strong, they’ve been strong all year. But for sure the timesheets look good, and the initial feedback seems positive, although we still have work to do to get a balance.

"It was an unknown coming in, but you knew you were going to have more [downforce]. We know we needed more.

"You don’t know what it’s going to be until you hit the track, but it’s a good problem to have, to have more and then try and deal with it."

Van Gisbergen was tight-lipped on the changes, only confirming that the car was making better rear grip, but now struggling for front grip.

He also referenced a drag penalty with the new package: "We’re too slow down the straight," said the Kiwi.

"As soon as I turned into the last corner I went faster on my first lap than I did in qualifying last year," he said. "Obviously big improvements have been made."

Dutton also dismissed any notion of T8 having come into the weekend with an advantage, as the homologating team, over the other Holden squads.

"Most of the CFD was done by Supercars, because they’re the only ones who can compare," he said.

"Supercars did their work comparing the models and said 'this will get you closer to the Mustang, so therefore do you want it?'

"We grabbed it with both hands, made the parts as quick as we could for all the teams up and down pitlane, and brought them with us to this round to have them bonded onto the cars here yesterday.