Holden Racing Team drivers Garth Tander and Will Davison put an end to the dominance of Triple 8's stranglehold on the Peter Brock Trophy by claiming the lion's first win at the Mountain since 2005. For three long years Craig Lowndes and Jamie ...

Holden Racing Team drivers Garth Tander and Will Davison put an end to the dominance of Triple 8's stranglehold on the Peter Brock Trophy by claiming the lion's first win at the Mountain since 2005. For three long years Craig Lowndes and Jamie Whincup have kept Holden fans quiet and at times yesterday looked like creating history with a fourth win, but a clutch problem, some aggressive driving by the Holden drivers and safety car periods during the final 40 laps of the Great Race ended that. 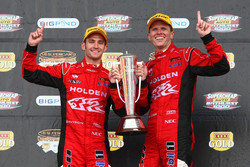 Garth Tander and Will Davison win the 2009 Bathurst 1000 for the Toll Holden Racing Team.
Photo by Chris Von Wieldt.

With the race starting under wet conditions strategy was going to play an important part, and that coupled with the additional pit stops due to the new Ethanol blended fuel was anyone's guess as to who would win after 161 laps of the world famous 6.2 kilometre Mount Panorama track. The 180,000 race fans who braved the wild weather over the weekend knew that they were going to leave with some great memories from the 2009 Supercheap Auto 1000 from the time the green flag dropped.

The Jack Daniels car of brothers Rick and Todd Kelly was first onto pit lane with Todd swapping his wets for slicks. Others soon followed including Lowndes, Davison and Steven Richards in the FPR Ford.

Rated as the factory Ford team, it was expected that Richards and Mark Winterbottom were intent on taking it to Lowndes and Whincup in the Team Vodafone Ford, who move to the Holden camp in 2010, but a lose battery ended their chances at third race distance when it ruptured a fuel pipe, igniting, forcing Winterbottom to alight from the vehicle on pit lane. This, together with a $15,000 fine for careless driving during Saturday's practice session was the weekend FPR would rather forget.

With Holden clean sweeping the podium and filling nine of the Top Ten spots Lowndes and Whincup can hold their heads high after placing fifth in their Ford, and so to can Jason Bright and Karl Reindler in the Fujitsu Falcon who grabbed eleventh considering on lap one Bright ended in the sand trap at Hell Corner.

Although HRT's win will be talked about for years to come, the others on the podium which included Jason Richards and Cameron McConville in the BOC Gas backed Holden and Lee Holdsworth and Michael Caruso in the Garry Rogers Valvoline Commodore should also be remembered for the fight (2nd and 3rd) they put up in the dying stages of the race. 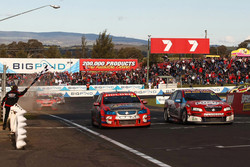 Lee Holdsworth battles with Greg Murphy to the flag for third.
Photo by Chris Von Wieldt.

Finishing in fourth spot was the pair of Greg Murphy and retiree Mark Skaife from Sprint Gas Racing, who combined hold nine Bathurst 1000 wins between them. At one stage Murphy lead the race and in the dying stages whilst running second another safety car period forced them back to 8th after an incident at the top of the mountain. Although Murphy fought back the reality was that Skaife was not going to claim a sixth title.

Perhaps Skaife, who was HRT's number one driver following Peter Brock's retirement in 1997 was not so much after a sixth title, but looking at ending his racing career with Australia's most prestigious silverware. After tears and celebration Tander paid tribute to Davison for enabling them to be the first Holden team to get their hands on the Peter Brock Trophy and it is fitting that it occurred 40 years after a young "Peter Perfect" debuted in a Holden Monaro at Mount Panorama.

HRT have claimed both the enduro titles in 2009 and their win places both drivers within striking distance of series leader Whincup with four rounds of the championship to complete which will end in Sydney with the Testra 400 around the Homebush Olympic Stadium in December.

Percat pushed over the line at Bathurst