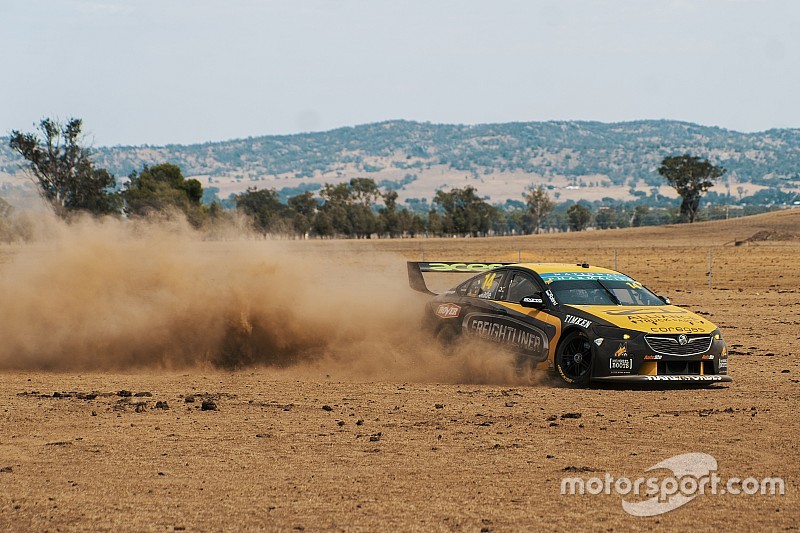 Tim Slade has hit the dirt in his Holden Supercar as part of a wild launch video for his 2019 livery.

Having used an open country road to film the Freightliner-backed Holden this time last year, Brad Jones Racing elected to use dirt tracks on a farm to launch this year's new look.

The premise of the launch video is a 'barn find', Slade uncovering his Commodore complete with its updated look in a dusty rural shed.

He then hits a series of dirt tracks, before some classic circle work reminiscent of his celebratory doughnuts when he won at Winton back in 2016.

“We had fantastic feedback on our launch video last year and it definitely stood out from the rest," said team boss Brad Jones.

"We knew we needed to deliver something like this again for Freightliner/Alliance Truck Parts and our fans, and we think this one might just be bigger and better.

"More of the Freightliner Coronado, more of the Supercar and a mountain of dirt! It’s very cool for our team to showcase our partners like this, the buzz it creates is pretty awesome.

“Tim was quite close to standing on the podium a couple of times last year, and there’s no doubt we’d like to get him back up there again in 2019.

"We’ve learned a lot of lessons over the last year with the ZB Commodore and are looking to improve on the consistency and deliver some good results.”

BJR still has two more cars to launch, with Macauley Jones' #21 entry set to be unveiled on Friday, while the launch of Nick Percat's #8 car is yet to be locked in.