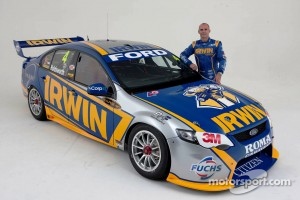 While IRWIN Racing’s Lee Holdsworth will spend a few seconds thinking about his 200th V8 Supercars race start, he is more focussed on getting a top result in Tasmania this weekend.

After five races this year Holdsworth has impressed everyone with his speed and his results. In two races at the season-opening Clipsal 500 and three non-championship outings at the Australian Grand Prix, he is yet to finish lower than eighth.

Coming into the second event of the V8 Supercars Championship, Holdsworth is sitting sixth overall and is going to Symmons Plains Raceway wanting to improve this position.

Holdsworth believes that if he can improve his qualifying performances, he has a chance to finish inside the top five and could even make the podium.

Holdsworth is feeling relaxed, he’s happy with the direction that he and his engineer Brad Wischusen are going with the IRWIN Tools Ford and he is enjoying driving a car that looks after its tyres.

The Tasmania Challenge begins at Symmons Plains Raceway this Friday. There are two races across the weekend, a 140km sprint on Saturday followed by a longer 84 lap, 200 kilometre race on Sunday.

What IRWIN Racing’s Lee Holdsworth had to say:

“Tasmania has been a good track for the team in the past, it’d be nice to get the IRWIN Tools Ford up there. There’re some hard breaking zones at Symmons Plains Raceway and it’s very technical through turns one and two, it’s easy to lock up a wheel, but it’s a good fun track and the crowd gets right behind us and enjoys the racing. In previous years I’ve struggled with tyre life, but it’s different at SBR and with the IRWIN Ford, our tyre life has been great. If I can qualify well then I'll certainly be looking for a top five, possibly a podium result and a haul of points for the championship.

What Lee had to say about his 200th V8 Race start:

“200 race starts, is that right? I knew it was coming up but didn’t realise it was at Symmons Plains. I suppose it says I‘m doing something right. My favourite memory is still winning at Oran Park in 2007. It was my first race win and my first round win. Standing on the podium with (Craig) Lowndes and (Steven) Richards next to me meant a lot because I respected them so much. It was a pretty proud moment; it still stands out the most for me. Of course, I’d like to add to my tally of wins this year. The top 10 then five is my first aim, then we’ll try for podiums. I’d like to think I can win a race in 2012.”

What IRWIN Racing’s engineer Brad Wischusen had to say:

“The fast nature of Symmons Plains Raceway means you need a really strong engine and a car that is good under brakes heading into the hairpin. You can run low ride heights because it’s not a particularly bumpy track and the lower ride heights help with the aerodynamics package. The last two corners are quite high load so the guys are on the throttle while they are turning so you need a lot of rear support in the car to achieve turn and drive at the same time. It’s the first permanent track that we go to, we don’t have the curves like we did at Clipsal and the Grand Prix, this changes the dampers and the hard and soft tyre rules come in, so we'll focus on the best possible set up for both types of tyres.”