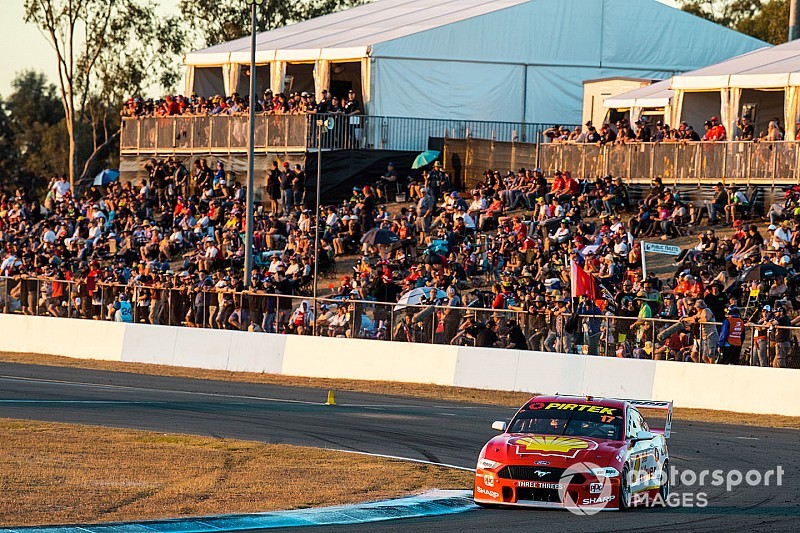 Scott McLaughlin held off a hard-charging Shane van Gisbergen to triumph in a tense Sunday showdown at Queensland Raceway.

The race boiled down to a thrilling battle between the two Kiwis, long-time leader McLaughlin coming under serious pressure from van Gisbergen in the closing stages.

After a five-lap, nose-to-tail battle it was the points leader that held on for a 0.7s victory, with Chaz Mostert a distant third for Tickford Racing.

For the second day running McLaughlin came under fire through the first two corners at the start, however this time things went his way as he staved off a Mostert challenge and held onto the lead.

From there McLaughlin was able to control the opening stint, pulling 3s on Mostert and co before making his first stop on Lap 15.

While McLaughlin retained the effective lead, the stops shook up the order behind him.

Jamie Whincup moved up to second thanks to a Lap 14 stop, while Mostert stayed out until Lap 19 and took on more fuel than the rest of the leaders, which dropped him to fourth behind van Gisbergen.

As McLaughlin continued to lead to the tune of 5s, van Gisbergen's race came alive in the second stint. By Lap 32 he'd managed to erase the 4s gap to Whincup, breezing past his teammate into second place.

Little changed for the front two during the second round of stops, McLaughlin taking a little under 5s worth of advantage into his Lap 38 service, and the gap sitting at around 4.5s once van Gisbergen had stopped a lap later.

There was a change behind them, however, with Mostert using his fuel advantage to jump Whincup as the pair followed McLaughlin in on Lap 38.

Van Gisbergen made good ground over the final stint, moving to within 1.5s of the leader with 10 laps to go.

With five laps to go the Kiwis were separated by just 0.5s, but despite van Gisbergen's best efforts McLaughlin was able to hang on to take a hard-fought win.

"[My car] was pushing like a bus or a truck, it just had no turn in it. But it was an awesome battle, we always have good battles me and Shane."

Van Gisbergen added: "I don't like coming second, but that was an awesome race.

"My car was awesome today, I tried as hard as I could. I knew we had a lot of adjustment in the roll bars.

"I was worried about how we qualified it, but a quick tune up and we were away."

Mostert was 10s down the road in third, while Whincup ended up a further 7s behind back in fourth.

Will Davison backed up his Saturday podium with a fifth ahead of Tickford teammate Cam Waters and Nissan drivers Andre Heimgartner and Rick Kelly.

The biggest loser in terms of the championship was Fabian Coulthard, a Lap 9 clash with Anton De Pasquale sending him off the road and out of contention for a decent result.

He finished the race down in 18th, and while he was able to hang on to second in the standings to the gap to his teammate is now a whopping 433 point.