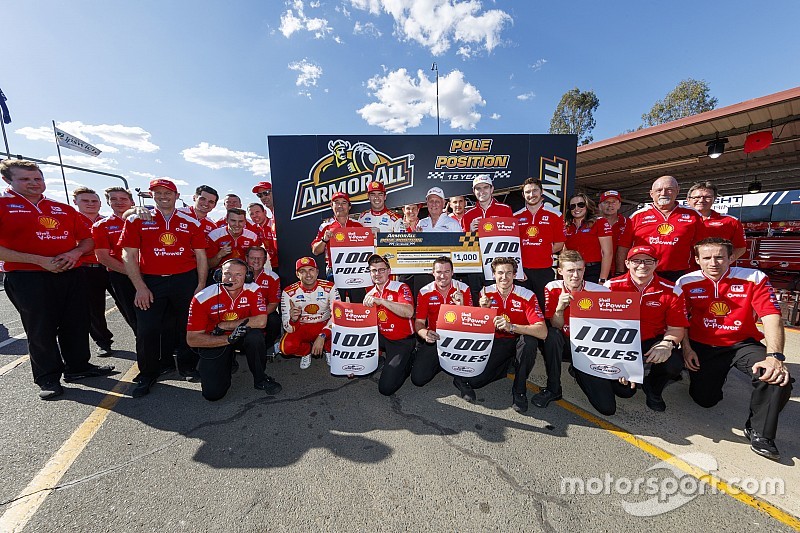 The series leader faced stiff opposition from Whincup in both segments of qualifying, with just 0.07s separating the pair in McLaughlin's favour in Q2.

McLaughlin then opted to go early in Q3, setting a formidable benchmark of 1m08.651s on his first run.

Whincup didn't appear until much later in the session, his green tyre run putting him just shy of a tenth short of McLaughlin's time.

By that stage McLaughlin was already back on track for a final run of his own, narrowly improving to a 1m08.636s.

The pole is McLaughlin's 12th of the season, and the 100th in the history of Dick Johnson Racing/DJR Team Penske.

Speaking about the session itself, McLaughlin added: "I knew that [Whincup] was pretty close, but we're in a pretty comfortable window with our race set-up so that we can go into the race and look after the tyres as well."

Whincup, who was just 18th in practice this morning, added that he is happy to end up second.

"We weren't that happy with the car in P3, but [engineer David] Cauchi made a really good tune before qualifying and the car was much better," he said.

"We owe it to everyone who's paid $50 to get in the gate today to get the start and then try and make a race of it. We'll proper race the #17 as hard as we possibly can.

"You've got be a little bit careful you don't expose yourself to the rest, but we're not here to run second. We'll give it a red hot go."

Tickford pair Will Davison and Lee Holdsworth locked out the second row, with Shane van Gisbergen and Chaz Mostert set to start from fifth and sixth respectively.

Anton De Pasquale edged teammate David Reynolds for eighth, while Fabian Coulthard ended up half a second off his teammate McLaughlin down in ninth.

Cam Waters was the only driver to take part in all three portions of qualifying, the Tickford driver set to start from 10th.