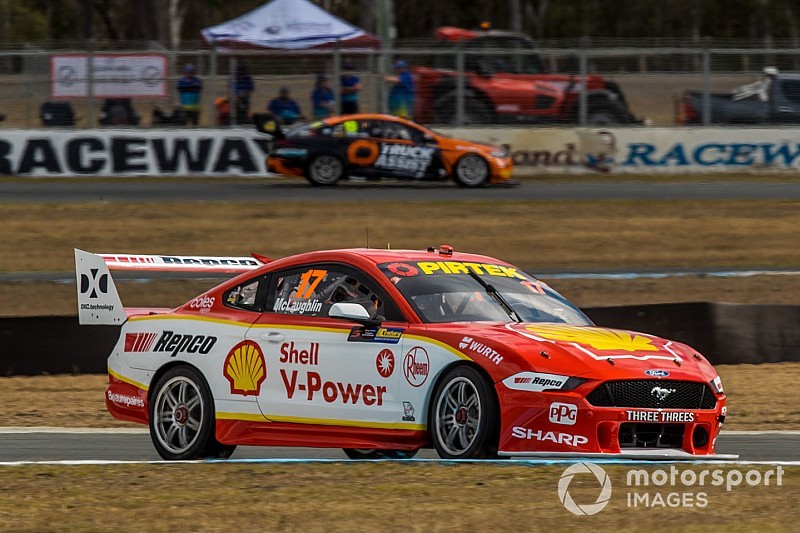 Scott McLaughlin secured his 13th pole of the 2019 Supercars season in comfortable fashion at Queensland Raceway.

The DJR Team Penske partly showed his hand in Q2, overcoming an impressive 1m08.625s effort from Jamie Whincup with a 1m08.608s right at the flag.

McLaughlin then effectively set two pole laps in Q3, both his 1m08.547s at the mid-point of the session, and his 1m08.513s on his final run, good enough for top spot.

However, having fallen short of his new record benchmark from Practice 4, McLaughlin wasn't entirely satisfied with the best of his qualifying laps.

"I'm so grateful for where we're at and the pace that we had, but you always want to do the perfect lap," he said. "I just missed that last sector.

"But overall it was a really strong first two sectors, and it feels like we've got a better car [than Saturday], but who knows. We'll see what goes on [in the race]."

Chaz Mostert made it an all-Mustang front row with a 1m08.619s right at the death, while it will be an all-Red Bull Holden second row, Whincup edging teammate Shane van Gisbergen.

Tickford drivers Will Davison and Cam Waters will start fifth and sixth, as Andre Heimgartner impressed by putting his Nissan seventh on the grid.

Nick Percat, Todd Hazelwood and David Reynolds all came all the way from Q1 to end up eighth, ninth and 10th respectively.

Fabian Coulthard will start the race from 11th after failing to make it through all three segments of qualifying.

The Penske Ford driver had to come the long way after struggling in practice this morning. While Q1 was easy enough to navigate, a late lap from Will Davison in Q2 was enough to leave Coulthard just outside the Top 10.

"Unfortunately that's our pace," he said.

"We've worked hard all weekend, [engineer] Mark [Fenning] has done an amazing job trying to get our car back in the window, and unfortunately [11th] is as good as we've got."