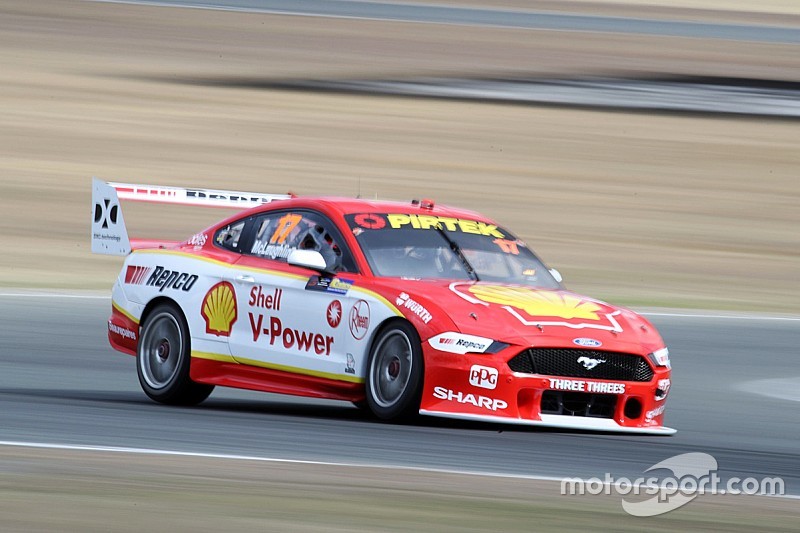 The DJR Team Penske driver wasn't a factor for much of the half-hour session, with the likes of Jamie Whincup and Will Davison leading the way.

However a move to a fresh set of rubber for a final run made the difference for the points leader, who jumped to the top with a 1m09.182s.

With none of the other front-runners improving at the flag, McLaughlin finished the session just over a tenth clear of Davison.

"I wasn't happy on the first set [of tyres], so I wanted to baseline what we had," said McLaughlin.

"The car is pretty good. There's a bit there in me and the car, but we're pretty happy with where we're at."

Tickford driver Davison had gone quickest with six minutes to go, thanks to a 1m09.417s, before returning with a minute to go for a run on better tyres. However catching some slower traffic at the last corner limited his improvement to a 1m09.325s.

"The guys that are starting their lap do a big wide turn-in to get a good exit," Davison explained.

"I was finishing my lap and lost a little bit in the middle of the last corner just coming up on this guys.

"It's just Practice 1 and the car was fast anyway, we were really quick on our first set of tyres."

Chaz Mostert made gains on his final run to slot into fifth, ahead of Kiwis Fabian Coulthard and Andre Heimgartner.

David Reynolds finished up eighth, Shane van Gisbergen ninth after losing much of his session to a gear sensor issue, and Todd Hazelwood in 10th.