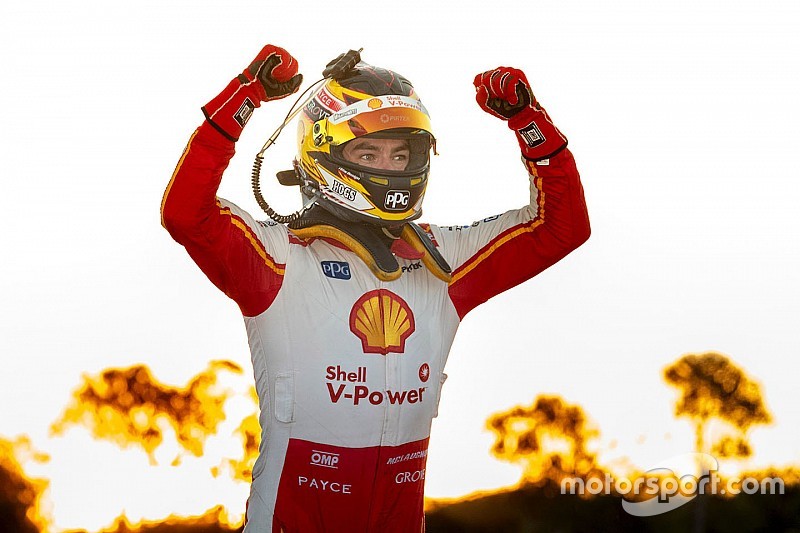 A slightly sluggish getaway from pole meant McLaughlin was forced to play a bit of defence to hold his teammate Fabian Coulthard at bay for the first few laps, the points leader eventually establishing a gap of just under two seconds as the field stabilised late in the first stint.

On Lap 13 he dived into the pits for his sole stop, emerging with the effective lead in hand, but a whole new threat in his mirrors in the form of Chaz Mostert.

The Tickford driver had benefited massively from the undercut, having made his stop five laps earlier (and only taken on three new tyres) after being dumped back to ninth by a run-in with Jamie Whincup.

Once again McLaughlin was able to fend off the guy behind him, leaving Mostert to scrap with the rest of the field in the second stint as he streaked to a 4.3s win.

"That was awesome," he said. "There was crazy stuff going on [during the first lap], and my tyres took ages to come up to temp. Once they did, I just checked out."

Van Gisbergen finished second, his race set by one of the best first laps of the season. It started with an perfect launch from eighth on the grid that helped him jump the third row of the grid before Turn 1, followed by a bold move around the outside of David Reynolds at Turn 2 put van Gisbergen into fourth.

The Kiwi then went around the outside of Rick Kelly at Turn 3 to set up a move for third into Turn 4.

Having shadowed the Penske Fords for the first stint van Gisbergen made his stop on Lap 14, coming out behind the undercutting Mostert and Craig Lowndes.

But with better tyre condition he was able to ease past Lowndes within a couple of laps, before charging by Mostert to secure second on Lap 25.

With Mostert slipping back to sixth as the second stint wore on, Lowndes was able to come home third.

Whincup finished up fourth, having survived a stewards inquiry into that third-lap run-in with Mostert.

It all started with Whincup giving Mostert a nudge at the final corner, the pair then running side-by-side onto the front straight where Mostert ended up with all four wheels off track after trying to hold on around the outside.

The incident was immediately investigated by the stewards, however Whincup was quickly cleared of any wrong-doing.

There was more action for the reigning champion late in the race, a long first stint meaning he had plenty to do on good tyres in the closing stages. He made it happen too, Whincup passing the likes of Coulthard and Mostert to finish fourth and somewhat minimise the points loss to McLaughlin.

Coulthard dropped to fifth in the closing stages.

The win means McLaughlin has extended his points lead to 143 over van Gisbergen.