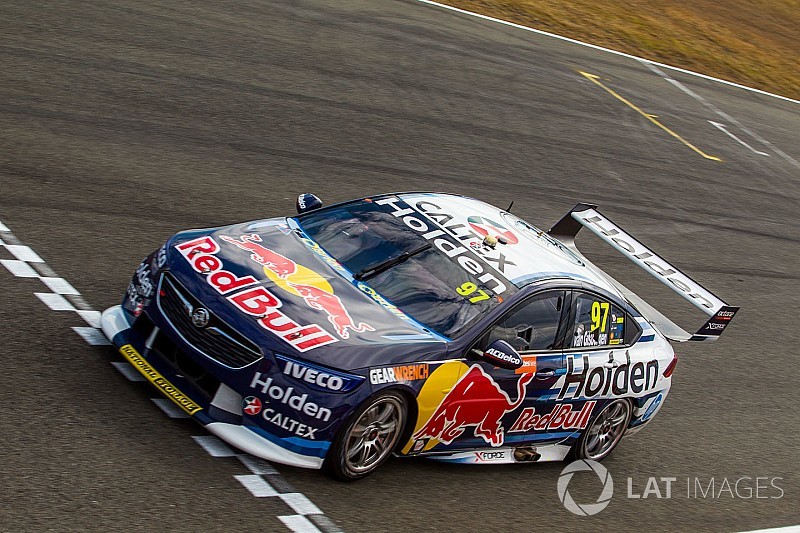 Van Gisbergen shot to the front early with another stellar start, easily clearing pole-sitter McLaughlin before Turn 1 on the opening lap.

However, things did not go near as smoothly back in the pack James Courtney and Mark Winterbottom collided in Turn 4, sending the latter driver spinning. It appeared Courtney's own teammate Scott Pye attempted to go three-wide into the corner, instigating the collision.

Both Winterbottom and Courtney were forced into the garage area for repairs, and the incident will undergo a post-race investigation. "I don't know what Scott was thinking, just pushed into the back of me, and then me into Winterbottom. Very silly thing to do first lap with your teammate in a 200k race," said an agitated Courtney.

After ten laps of racing, McLaughlin and Chaz Mostert were among those who kicked off the first round of pit stops. Van Gisbergen opted to push the run much further, pitting on Lap 21 and falling back to fourth on track.

He did not stay there for long however, swiftly running down and overtaking both Fabian Coulthard and Mostert.

Back in the pack, Tim Blanchard went for a quick spin after contact with Kurt Kostecki at Turn 6, who was then handed a 15 second time penalty.

On Lap 36, McLaughlin dove to the pits for his final stop of the race. Van Gisbergen followed suit two laps later, emerging 1.5 seconds clear of his title rival.

Although the DJR Team Penske driver cut the gap down to half a second, Van Gisbergen was able to open it back up in the final five laps, cruising to the checkered flag 2.3 seconds ahead.

"Good battle with Scotty ... What a day, thanks to the team. Car was awesome. Pretty stoked with that," said Van Gisbergen

The result was a reversal of Saturday's result, allowing the Triple Eight driver to make up the ground he lost in Race #1 and bringing the points gap back down to 131 markers.

"Overall, pretty good weekend ... At the end of the day, they were just fast," said McLaughlin, who leaves Queensland with the same points margin as when the weekend began.