Bathurst certainly lived up to its reputation as Australia’s greatest race with Jamie Whincup and David Reynolds battling to the chequered flag in a classic Holden versus Ford battle Mt Panorama today. 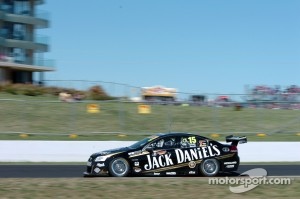 Over the last 15 laps of the 161-lap race, Whincup and Reynolds raced nose to tail as Reynolds tried everything to pass Whincup. On a few occasions he almost drew level, their battle captivating the record crowd with some of the hardest, and most entertaining racing seen in the 50-year history of the race.

Rick and Todd Kelly showed impressive speed, getting the two Jack Daniel's Racing Commodores well into the top ten on several occasions throughout the day.

In front of a record crowd, the Supercheap Auto Bathurst 1,000 got under way with Paul Dumbrell grabbing the lead but he was quickly overtaken on lap two and three by the Fords of Will Davison and Shane van Gisbergen.

At the end of lap 10 Jack Daniel's Racing’s Rick Kelly reported a tyre delamination and pitted the following lap for fuel and tyres. At this stage Todd Kelly in the #7 car was running 19th, his starting spot. Rick resumed the race in 29th place.

On the 19th lap Todd Kelly reported a similar tyre issue to Rick and pitted on lap 20.

The first safety car period for the day occurred on lap 21 and having just pitted Rick, remained on the track while the majority of the field pitted. This elevated him seventeen places up 5th after 30 laps with Todd in 21st.

Rick pitted for the second time on lap 36 for fuel, tyres and a driver change, with David Russell now taking the wheel and resuming in 27th.

On lap 37 last year’s winner Nick Percat clipped the wall at the top of the mountain and had to nurse his car back to the pits, dropping towards the back of the field to eventually finish 25th.

The second safety car period occurred on lap 40 with many teams pitting, but the Jack Daniel's Racing team stayed out, moving up the field.

On lap 51 the third safety car period occurred after Steve Owen slammed into the fence at turn two. Fortunately he was unhurt.

On lap 67 Dave Russell pitted the #15 car from 12th place for fuel and tyres and resumed 24th.

Todd made his next pitstop on lap 80, the midway point of the race, from 9th place for fuel, tyres, driver change to Blanchard and a wing adjustment. At this stage, the top five were Dumbrell, Reynolds, Caruso, Courtney and Winterbottom. Blanchard resumed in 21st place with Russell in 19th.

On lap 90 the #15 Jack Daniel's Racing car pitted for fuel, tyres, a driver change, brake pads and front rotors with Rick now back behind the wheel.

Shortly after Tim Blanchard brought the #7 car to the pits for a fuel stop.

On lap 102 Rick set his best time of the race and just two laps later pulled off one of the passing moves of the race, going three-wide up mountain straight taking Chris Pither and Craig Baird into turn two and move into 14th.

Tim Blanchard visited pitlane once again on lap 106 to hand back the #7 Jack Daniel's Racing Commodore to Todd Kelly who would take it through to the chequered flag.

The final safety car period of the race occurred on lap 113 and when racing resumed Rick was 7th and Todd 15th.

On lap 132 Rick pitted for what he hoped would be his final time and fitted a brand new set of brand slick tyres and a full tank of fuel. It was going to be difficult to run 29 laps on a tank of fuel, as Rick had to drive as fast as he could, while using as little fuel as possible. His race then became a high-speed economy run.

The strategy the team worked towards included a late safety car period. Unfortunately the safety car failed to materialise and Rick was forced to pit for a final splash of fuel on lap 153 to eventually finish 15th.

Todd pitted on lap 142 for the final time and like Rick, took on a full tank of fuel and new slick tyres and resumed in 18th place where he would eventually finish.

Rick Kelly – “Today was very promising for us to make a significant improvement in our general car speed and we definitely had the car speed to finish in the top few which is really good from earlier in the year. It’s really good to make those improvements but there are so many good drivers and teams out there and a lack of safety cars out there and we really needed one late in the day for our strategy. We got hindered early on with the a delaminated tyre and that set the tone for when we had to pit early on and it kind of snookered us to a large extent. Had the safety car appeared, I’m sure we would have finished around sixth or seventh”.

Todd Kelly – “We kind of lost the strategy in the middle of the race and seemed to spending a lot of the race saving as much fuel as possible and going slowly and unable to race the cars around us and that put us back a fair bit. But when we could run the cars a little richer and press on the car was certainly fast enough”.