He’s just become the second ever driver to win 100 Supercars races, but like any driver Jamie Whincup has a few that got away. He went through his Top 5 missed opportunities with Andrew van Leeuwen.

It’s quite unlikely that Jamie Whincup wakes up in a cold sweat at night thinking about the races he didn’t win. With 100 victories and six titles to his name, Whincup’s Supercars record is enviable. He’s literally won at every single circuit on the current schedule, so his CV is not wanting for much.

However, he is a racing driver – and a very competitive one at that. His missed opportunities may not be a constant annoyance, but the niggle is there when he thinks about them… which is precisely what we asked him to do.

So what are the Top 5 races that Whincup should have won but didn’t? 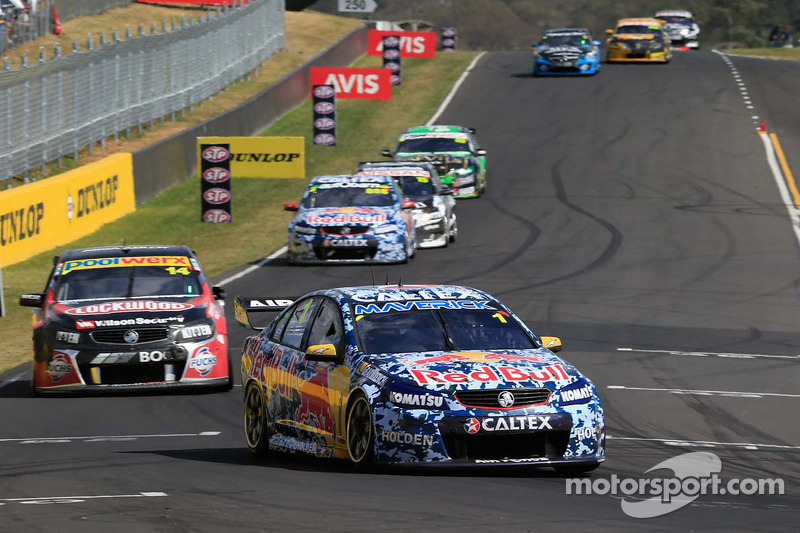 Jamie Whincup and Paul Dumbrell at the 2014 Bathurst 1000

The first of the two-chapter tale of woe that is Jamie Whincup and the Bathurst 1000 over the last couple of years. In 2014, Whincup and co-driver Paul Dumbrell went within half a lap of winning the Great Race – before running out of fuel and having to roll to the finish line.

“I hate going straight for Bathurst, because it seems too cliché,” says Whincup. “But the reality is that the last two Bathursts are right up there in terms of missed opportunities.

"And it’s such a big race too, which I guess is why they stick in my mind.”

“It actually wasn’t until that point that we realised we were in trouble. Before that, it was always going to be close – as it always is with a fuel race – but you generally fall on the right side once you add in a few of the little factors here and there.

“But unfortunately that day, boom. It didn’t happen. As soon as we hit the fuel pot, it was a case of forgetting about the race win and just trying to get it home.

“Thankfully we rolled across the line in fifth, so it wasn’t a total disaster. We could have quite easily still been sitting at The Chase right now.” 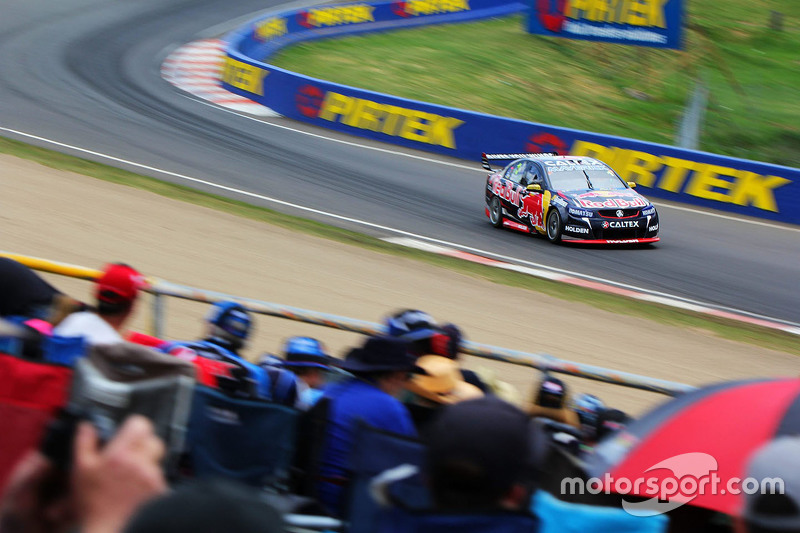 Jamie Whincup and Paul Dumbrell at the 2015 Bathurst 1000

A year later, Whincup had another opportunity to add a fifth Bathurst win. With he and Dumbrell very much in contention to win, Whincup made the bold call to ignore a ‘pit in’ call when the Safety Car appeared on Lap 138 to avoid stacking behind Craig Lowndes.

It was the wrong call, compounded by Whincup then being pinged for passing the Safety Car when he apparently shouldn’t have. Between the strategic blunder and the drive-through penalty, the #1 Commodore finished down in 18th.

“Last year, it was one of those days where it was anyone’s race,” Whincup reflects. “There were 15 cars in contention to win that day, so it’s not like I was the clear favourite.

“But we were in the box seat, and yeah, there was a miscommunication or misunderstanding on the radio. I made a split-second call like I always do, and it was the wrong one. At the end of the day, I made the wrong call and elected to stay out.

“We won’t go into the Safety Car thing, though (laughs). That’s one of the great debates that will go down in history.” 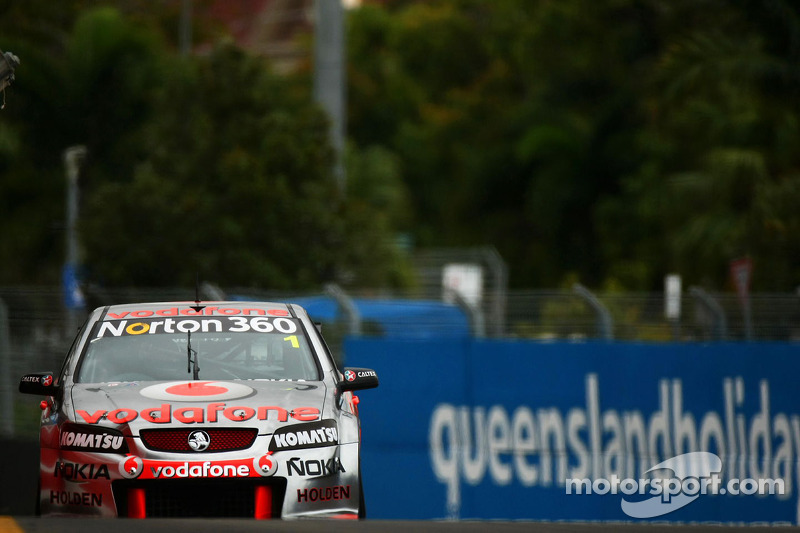 Jamie Whincup in Townsville in 2010

Locked in a points battle with James Courtney, Whincup made an almost perfect start to the 2010 Townsville 400 with a comfortable nine-second win on the Saturday.

Starting from pole he looked set to do it again on the Sunday, only for a cut brake line to ruin his day. Whincup finished 23rd, while Courtney was second and left Far North Queensland with a 120-odd point lead.

“That second race in Townsville in 2010 always sticks in my mind,” says Whincup. “I hit a bump and ripped the rear brake line out of the car.

“Townsville is a big one for me, it’s a big event. I had won on the Saturday that year, and on the Sunday we had led the race and it was all looking pretty good. But once I hit that bump, that was it.” 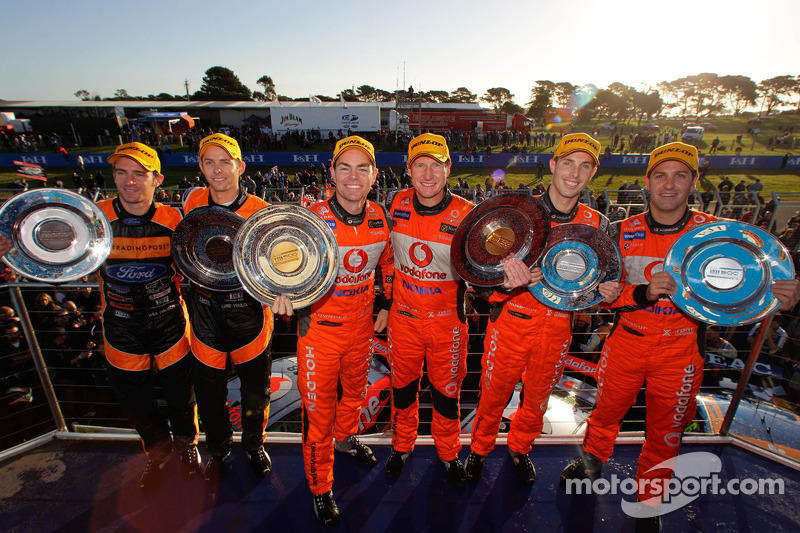 Having missed out on a decent result – probably victory – at the 500-kay Phillip Island race in 2010 thanks to a busted front splitter, a win went begging for a bizarre reason a year later.

The two then Vodafone-backed cars ran away with the race, making it a showdown between Whincup/Andrew Thompson and Craig Lowndes/Mark Skaife. And when the on-track battle turned physical, Skaife and Thompson having a very small coming together, it was decided in favour of the #888 car.

“We were in a good place, but Skaifey slipped up the inside of Thommo mid-race and ran into the driver’s side door,” says Whincup.

“That meant that in the pitstop we couldn’t open the door to do the driver change! It cost us a lot of time, and a chance at winning. That’s one that got away, for sure.” 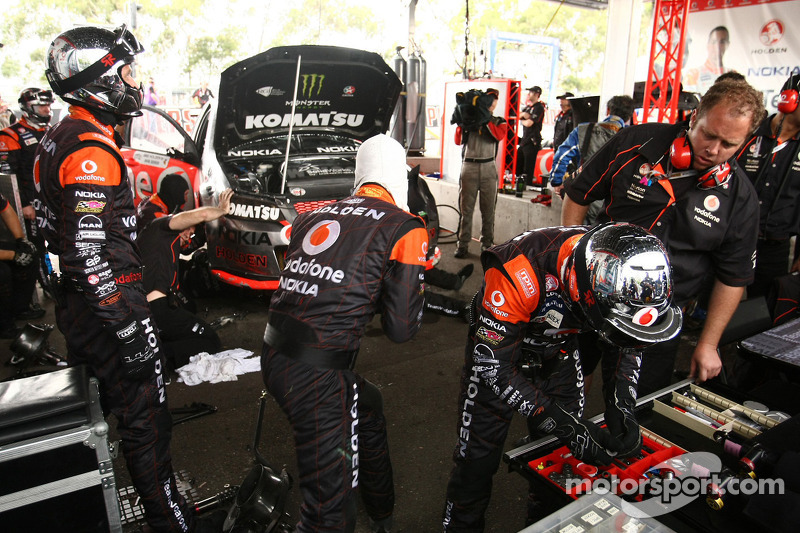 This one isn’t just a race win that got away, but a title as well.

In what has become one of the most memorable moments in Supercars history, title contenders Whincup and Courtney (along with Mark Winterbottom) both hit the wall mid-way through Saturday’s race when a sudden downpour caught them out on slick tyres.

They all limped back to the pits, attention turning to a race in the garage to fix the cars and get them back out in time to be classified and earn valuable points. But while Dick Johnson Racing patched up Courtney’s Falcon quickly enough for him to be classified, the Triple Eight crew didn’t quite make it, Whincup missing out on any points.

It gave Courtney a 113-point lead, which meant he needed just 23rd or better on the Sunday. In other words, it cost Whincup any real shot at the title.

“This is a tough one, because it wasn’t necessarily a race win that got away. But it obviously had a huge impact on the title being decided,” he says.

“There were two factors in the second half of the 2010 season. I had a splitter break at Phillip Island, which cost us heavily. And then that rain coming down in Sydney.

“Not getting back out on track after the car was damaged, just to score some points, was the big one. Smacking the wall itself wasn’t that big a deal, because everybody did it. But that battle in the pits was… at the end of the day, we couldn’t kick ourselves about it because we actually tried to repair the car properly. But we probably shouldn’t have, we should have just taped the front uprights in and cruised around to score some points!

“I felt guilty sitting in the car while it was all going on, because I was the one who hit the wall. From there I was relying on my team-mates – like I always am – to do the best job they could.

“They did a great job, but the path we took wasn’t what we needed on the day unfortunately.”

Wildcard could keep Lowndes on the Bathurst 1000 grid

Early Adelaide 500 revival on the table