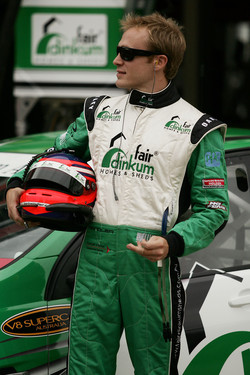 Reindler will embark on his third season in the top-level of V8 Supercars in 2012. The 26-year-old raced for Brad Jones Racing in 2010 and 2011 after winning the prestigious Mike Kable Young Gun Award for his efforts in the V8 Supercars Development Series in 2008.

He also has experience at a global level in Formula 3, A1GP and sportscar competition, having embarked on an international career after winning the Australian Formula 3 Championship in 2004.

Reindler made headlines at his home event at Barbagallo Raceway last year when he survived a horrifying start-line crash with Steve Owen, video and pictures of the fireball featured internationally and making him a YouTube sensation.

Born and bred in Perth, Reindler has relocated to Melbourne as he aims to take his racing career to the next level. Evidence of his potential was on show in 2011 with four top 10 race finishes highlighted by a fifth place finish at Queensland Raceway, as well as two top 10 qualifying performances. His best finish was seventh place in Perth.

Reindler is arguably the fittest driver in the V8 Supercars Championship, regularly competing in triathlon and long-distance running events and taking victory in one event last November.

The 2012 V8 Supercars Championship kicks off with an official pre-season test day at Sandown International Raceway in Melbourne, Victoria this Saturday (February 11) from 9am to 5pm AEDST.

“To have Fair Dinkum Sheds onboard with me for the third year in a row is great as well and I’m looking forward to building on that relationship even further in 2012.

“I had some time in the Kelly Racing workshop in January to run through plans for this season and to meet all of the crew and there is a really great atmosphere within the place.

“The facility is just incredible and the fact that they are building more to bring it all under one roof just adds to that and makes it a great showcase for the sport. It’s the best facility that I’ve seen in the country.

“To have four cars in the one team to collect and compare a lot of data is great for me as I look to improve and take my driving to the next level.

“I’ve had a chance to spend time with Todd, Rick and Murph as part of the team’s fitness program and I know already that I’m going to learn a lot from those guys this year with their collective experience.

“This is the start of what I hope to be a long and prosperous relationship with Kelly Racing. The team is one of the newest in the championship but they had some great results last year and the team is constantly building on what they have to ensure they keep progressing.

“They are improving in every area whether it’s the facility, engineering department, the cars or the commercial side of the business.

“The attention to detail is just unbelievable. If they can improve on something they will do it and they are very serious about what they do.

“You can see that with their quick rise and to have results come so quickly, with Rick having three wins in the team's third year, is a credit to the team, its management and how the business operates.”

“We are very exited to have Karl join Kelly Racing for 2012,” said Rick Kelly.

“Karl is a great young guy with a lot of talent and as a team we are going to work hard with him to unlock that potential with the aim of having him finish in the top 10 on a regular basis.

“I have raced with Karl many times on the track and have a lot of respect for him in the way he approaches his racing.

“Karl fits very well with the future plans of our team and it’s refreshing to see that he is just as excited about our new relationship as everyone here at Kelly Racing is, including Todd and myself.

“The appointment of Karl as one of our leading drivers also brings with it the opportunity for us to learn from Karl in many aspects of racing including fitness, which is something he is renowned for, and on the flip side allows Todd, Murph and me the opportunity to work with Karl to help him achieve his goals in V8 Supercars.

“Kelly Racing is also extremely excited to welcome Fair Dinkum Sheds to the team. They have been a tremendous supporter of Karl for the past few years and we look forward to working with them this year and making them truly feel a part of our operation.”

“Fair Dinkum Sheds is thrilled to be continuing our involvement in V8 Supercars, as well as furthering our support of Karl Reindler,” said Travis Griffin.

“Karl has been a magnificent ambassador for the Fair Dinkum Sheds brand and is very well regarded by our national network of distributors – many of whom have really embraced our sponsorship by having their own cars branded in the team livery.

“We consider Karl to be part of the Fair Dinkum Sheds family because of his enthusiasm and professionalism in supporting our activities beyond the race track. He’s gone out of his way to ride with our staff in the Sydney to Gong bike ride for MS (multiple sclerosis), and has worked with us to visit and promote Men’s Sheds – a great cause we are also proud to be involved with.

“Fair Dinkum Sheds is very thankful for the great support we’ve received from the motorsport community over the years. We’re sure that our move with Karl over to Kelly Racing will encourage even more support as Karl ups the ante during his third year in the main game.

“We wish Karl and Kelly Racing a highly successful year, and wish all V8 Supercar drivers and teams a safe 2012 season.”