Ahead of this weekend’s Sydney Telstra 500, Todd and Rick Kelly have unveiled their plans to thank and pay tribute to both Holden and the loyal Holden fans that have supported them throughout their careers to date.

The Sydney Telstra 500 will mark the last round as a Holden Team prior to Kelly Racing’s move to Nissan in 2013.

As a tribute to the fantastic support that Holden have shown to Todd and Rick throughout Todd’s 16 years as a Holden Driver, and Rick’s 12 years, both Jack Daniel’s cars will display “Thank You Holden” across their bonnets, together with some very impressive facts and achievements that Todd, Rick and Holden have achieved together over their combined 28 years together.

Rick and Todd built their V8 Supercar careers with Holden, initially through the Holden Young Lions program. Todd joined the Championship in 1999 followed by Rick in 2002. Todd then joined Mark Skaife at the Holden Racing Team in 2003 and Rick moved across to the then K-Mart backed HSV Dealer Team in 2003.

In his thirteen years driving Holden’s, Todd’s enviable record includes 172 events and 381 race starts. His first V8 Supercar race win was at the now-defunct Canberra street circuit in 2000 and a year later, Todd achieved his first round win at a very wet Sandown. Endurance race success came in 2003 with Mark Skaife at the Sandown 500.

The ultimate prize in V8 Supercars, winning the Bathurst 1,000 was Todd’s in 2005 when he joined Mark Skaife once again. Earlier that same year Todd gave Holden an international win at the Shanghai round of the V8 Supercar Championship. Todd won two of the three races and finished third in the other for a near perfect weekend.

Todd: “Even though Rick and I are about to embark on an exciting new phase in our 4 year old Team, the memories of our long association with Holden will always be cherished.

“We are both very fortunate to be in the position we are today with our own 4 car team and we would not be here if it wasn’t for our entry into V8 Supercars from our opportunity with Holden and the Holden Young Lions program”.

Rick’s time behind the wheel of a Holden is equally impressive with 153 event and 329 V8 Supercar race starts. In that time he has won the Bathurst 1,000 twice with Greg Murphy and was also crowned 2006 V8 Supercar Champion.

Rick’s first race win was at Bathurst with Murphy in 2003, which also gave him his first round win. However, his first solo win was at Sydney’s Eastern Creek early in 2004 in the wet.

Both Rick and Todd readily acknowledge the significant role that Holden has played in their careers and are grateful for their backing. 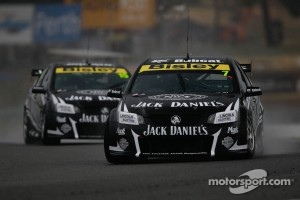 Rick Kelly said: “Whilst our Race Team heads towards a new and very exciting chapter next year, this weekend marks the end of a long and very memorable relationship with Holden”.

“I would like to take this opportunity to thank the Team at Holden for giving Todd and I the opportunities that they have put forward to us over the years, particularly in the early days when we both lived in Mildura and were selected for the Holden Young Lions Program. Without these opportunities we wouldn’t be in the position we are now, and for that we are very grateful. We have achieved many great things together and have build great relationships along the way”.

Rick went on to say: “I would also like to thank all of the loyal Holden fans that have supported us through our journey with Holden. I have thoroughly enjoyed representing each and every one of you in the great battles we have had on the track over the years. I also appreciate the support you have shown for the important next chapter of our Team and careers”.

“It’s with great pride that the two Jack Daniel’s cars this weekend will display a tribute to Holden. It’s very important for both Todd and I to remember where we have come from and that we have been able to achieve the things we have because of the great support of companies like Holden. The unique bonnet liveries that we will run this weekend are a great way for us to show this. The final laps of Sunday’s race won’t be taken lightly, and we hope to be able to finish this great and successful relationship on as higher note as possible”.