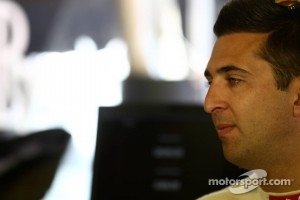 'Just desserts' provided Fabian Coulthard with the most excitement in today's 84-lap race as he regained two places to finish P11 after Premat nearly ended his race early.

The Lockwood Racing driver had a narrow escape when Fujitsu Racing's Alexandre Premat made an ill judged pass on lap 68, letting Steve Owen through as well.

Premat and Owen tangled at the next corner, however, allowing Coulthard to sail past them at the Tasmanian track, despite suffering from handling issues.

V8 Supercars will return to the track in Hamilton, New Zealand from 20-22 April.

"I came out of the hairpin and it looked like Premat missed a gear. I was able to go up the inside into turn six but I knew he would do an over-and-under so I defended. He got his nose in but it was nowhere near enough and he hit me in the left rear bumper. It got pretty ugly there and I don't think it was necessary. It could've been a big crash. Steve Owen got past the both of us and then they both banged into each other into turn two and ran off. I thought 'that's just desserts!' and took both spots back.

"I could hold my own today but that was the biggest thing. We weren't massively stronger than anyone but we were in the right position at the right time to take advantage when needed. The car's still a bit of a handful. It hasn't been a strong round for the team. I feel we made some progress but we're still a long way off."