Lowndes: It's my best shot after carnage in Surfers 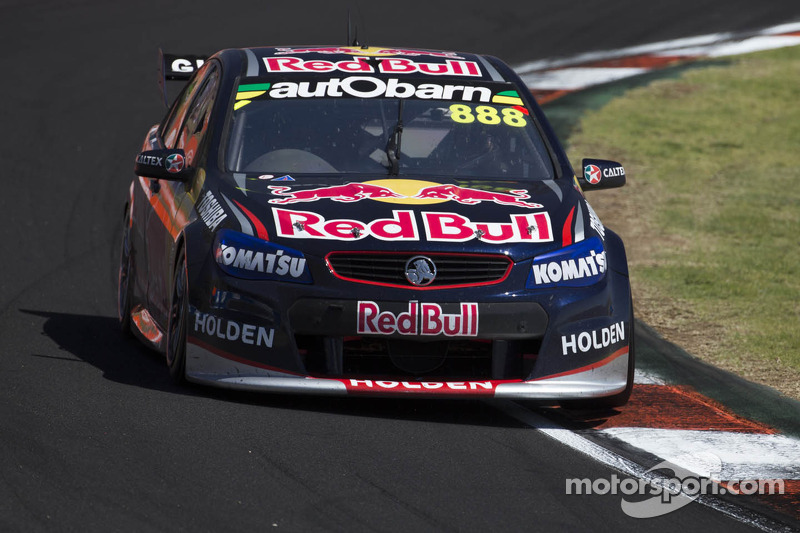 The streets of Surfers Paradise was filled with action and crashes. The survivors were Craig Lowndes and co-driver Warren Luff.

Craig Lowndes has his "best shot in a long time" of finally beating his dominant Red Bull team-mate Jamie Whincup for a Championship after a crazy day on the streets of Surfers Paradise.

Lowndes leads the V8 Supercar Championship after Whincup and team-mate Paul Dumbrell had a nightmare first race of the ARMOR ALL Gold Coast 600, retiring after just 21 of 102 laps.

It means only 49 Championship points separate Lowndes, Whincup and Winterbottom with Will Davison (-115) also in the title hunt with two events to go. Lowndes is ahead of Whincup by 36 points.

Carnage reigned supreme on the streets as car after car found walls or trouble. The amazing spectacle was ultimately won by seconds on line ball strategy calls.

Lowndes has only won twice on the Gold Coast streets way back in 2005 despite having now 93 victories under his belt as the all-time best.

"A couple of years ago we came into this weekend leading the Championship but we went out of the back side of it second and we lost it from here," said Lowndes.

"This has always been the bogey round for me and I have never had a good clean run throughout. Where we are right now is fantastic.

"It's the best shot that I've had in a long time to win the Championship."

Winterbottom has had a week of backwards and forwards in the press with Whincup but for now has the bragging rights.

"Today was definitely a boost (to championship chances). We are within striking distance. It is under 50 points. If you look back to Texas it was 460 points I think. It is obviously a good thing to get it back to 50. Even Will has closed up the gap in fourth," he said.

"All four guys are probably licking their lips thinking they can win this thing. Tomorrow is going to be a big day for points. Them Phillip Island and Homebush which is the other danger round where there is a lot of concrete and things you can hit.

"Get rid of tomorrow and the final two in Sydney - and it's going to be a good fight. We are pretty happy with the result today for sure."

Lowndes defied Van Gisbergen in the pits, jumping him on a shorter fuel stop.

"It's nice to finally have a good run. Shane had really good pace in that second to last sprint. Both of us were on the same strategy for fuel and everything else. We hoped to have a quicker last stop which we ended up being," he said.

"We only put rears on and it imbalanced the car for a few laps but once the rear tyres settled down we had good pace and we had a really good run through traffic. It's nice to be finally back on the podium. It is a track I enjoy it's just in the past I haven't had a good run."

Van Gisbergen was a little unlucky but happy to be back on the podium.

"There were so many different strategies," he said. "At the safety car we had to pit and we came out with car. We managed to pass him on track and at the end he jumped us at the stop with rears. I caught him with a couple of laps. His pace was unreal for rears only. He was really impressive."

The most significant incident was early in the race between Dumbrell in #1 and Greg Murphy in #22. Neither of the Commodores continued and there is significant damage to the Holden Racing Team car, though it will be ready to race tomorrow.

Others to note include Lee Holdsworth/Craig Baird, the first Erebus Mercedes home in 12th, Garth Tander/Nick Percat in 18th after the HRT car failed to start during a pit stop and Scott McLaughlin/Jack Perkins in 22nd suffering what is believed to be electrical dramas.

Jason Bright/Andrew Jones did not start the race, though Team BOC pushed to repair the Commodore in time.

The second and final race of the ARMOR ALL Gold Coast 600 takes place over another bruising 300km tomorrow.

Coulthard: I'll put it together

Close, but no great result for Nissan at Surfers Paradise