Marcos Ambrose screamed around Eastern Creek yesterday in his Stone Bros prepared Pirtek Ford, taking out the V8 Supercar Championship, ending Holden's dominance of the series for the past five years. Marcos Ambrose is Ford through and ...

Marcos Ambrose screamed around Eastern Creek yesterday in his Stone Bros prepared Pirtek Ford, taking out the V8 Supercar Championship, ending Holden's dominance of the series for the past five years. 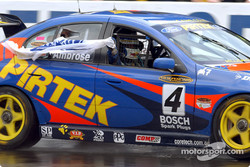 Marcos Ambrose is Ford through and through.
Photo by John Maricic.
The finale was billed as 'The Main Event', and fans, particularly the Blue Oval brigade weren't disappointed, despite heavy rain bringing out the red flag seven laps from the end. The race finished under the pace car, which was the only car on track that was going to stop the 'Devil Racer', who was at the front of the field the entire weekend.

Ambrose almost repeated Greg Murphy's efforts of Pukekohe a couple of weeks ago, although failed to take pole position, which was taken out by his nemesis Mark Skaife who paid the ultimate price by jumping the start of race one on Saturday, resulting in a stop/go penalty, ending any chance of claiming his sixth title.

That wasn't the only controversy that surrounded Skaife over the weekend, his tangle at three quarter race distance with 'The Enforcer' Russell Ingall had the Holden driver fuming to the point that he was out of his car and ready to box on, much to the cheer of the contingent of Ford diehards who witnessed several replays on the big screens. Although both drivers were fined later, to most at the circuit it was considered a racing accident.

That incident, together with Murphy's non appearance for race two due to a back injury suffered in the VB Challenge took some gloss off Ambrose's victory, who has been the dominant driver all year, winning six of the thirteen rounds, to finish 102 points clear of the Kiwi, with Skaife back in third.

With the storm cutting power to the circuit briefly, fans were wondering if the race was going to be re-started once the sun came out and the safety car pulled into the pits, but that soon ended when Ambrose crawled across the line ahead of Jason Bright in the Team Brock Commodore and Brazilian Max Wilson in the Shell Helix Ford. He then proceeded to do donuts in front of the grand stand before jumping out of the car and performed his trademark salute to the crowd from the pit wall. 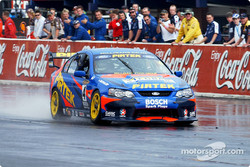 Marcos Ambrose acknowledges the crowd.
Photo by John Maricic.
The excited Pirtek pilot said during the press conference that he couldn't believe the year and thanked the Stone Bros for providing him with a car considered almost bullet proof. He talked about the pressure of leading the championship for most of the year, taking a long break and returning to see the number one on his car next year after taking it off Skaifey.

AVESCO officials couldn't have asked for a better end to the season after introducing a new point score system earlier this year, which in the wash up rewarded those for consistency and will only enhance competition in 2004.

Talking about next year, it will be interesting to see Konica winner and young gun Mark Winterbottom behind the wheel of the Orrcon Racing Ford, as team owner Mark Larkham steps aside, although he will contest the enduro rounds. Ironically, Winterbottom was contracted to Stone Bros. but with Ambrose taking the championship and Ingall having one of his best years, it wouldn't be prudent to see this talent sitting on the sideline, which is where David Besnard may be after Ford Performance Racing announced that it was strategically impossible to run a three car team in the future.

Winterbottom to race DeWalt Camaro in 2023