New Zealand racer Mark Porter died on Sunday, October 8th (Australia) at Royal Prince Alfred Hospital in Sydney where he had remained in critical condition from injuries sustained in a crash Friday at Mount Panorama circuit in Bathurst, New South ... 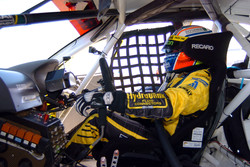 Porter was racing in the CAMS-sanctioned V8 Fujitsu development series' first race of the weekend when he spun his Hydralink Holden and was stalled in the middle of the track before being hit by David Clark who was traveling at 200 kilometres per hour coming around the blind left hand turn.

The 31-year-old New Zealander had never regained consciousness and had remained on life support before he faded with his wife Adrienne Porter, his young son and his parents at his side.

Optima Sport's driver Clark remains at Sydney's Nepean Hospital with multiple fractures to the right side of his body and a punctured lung. The Australian is alert as he continues to recover from his injuries.

Australia has been rocked recently from recent deaths, including the "King of the Mountain" Peter Brock who died of fatal injuries on September 8th participating in a local rally event. To many racers, Brock was their mentor and hero.

The Bathurst 1000 trophy was renamed in Brock's honor. Porter would have co-driven for the BOC Ford team with fellow Kiwi Dale Brede. The 1000 event was still held on Sunday with Brock's protege Craig Lowndes and his co-driver Jamie Whincup landing the victory.

The news of Porter's death reached the racing community in Australia and New Zealand on late Sunday, local time.

The 31-year old New Zealander's family has requested privacy, but did make a brief statement:

"The family wishes to convey their heartfelt appreciation for the efforts of the medical crews who have been involved all the way through -- at the track, at the Bathurst Base Hospital and at the Royal Prince Alfred Hospital, and all of those who transported Mark between those facilities. They gave Mark every chance at life, for which we thank them."

The LMP2 prototype class is looking increasingly likely to be dropped from the FIA World Endurance Championship for 2024 as the Hypercar category grows.

The FIA believes there is “no doubt” it did the right thing by changing Formula 1’s floor rules for 2023 to combat porpoising.