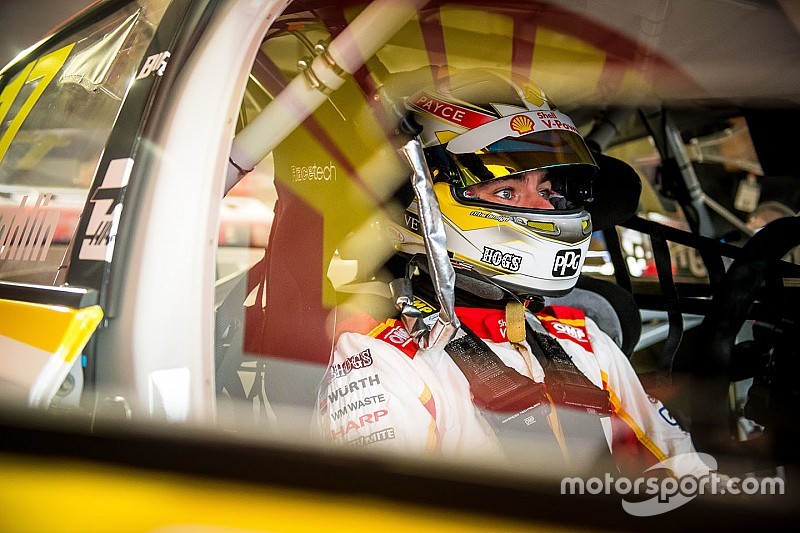 Still coming to grips with the Penske Ford after joining the team in the off-season, McLaughlin reckons today’s running was another step towards becoming truly comfortable with the front-running package.

“I’m pretty happy,” said McLaughlin. “We got through a lot of stuff; it was a big test day, and very productive.

“For us heading to Darwin it was very important, and for me I feel even more comfortable in the car. That’s what it’s all about.

“In your first year in a new team it’s important to use these test days as much as you can, and I think we did that today.”

DJRTP ran three drivers across the day, with Coulthard’s endurance co-driver Tony D’Alberto spending some time in the #12 Falcon.

Van Gisbergen’s enduro co-driver Matt Campbell was also on hand to sample the #97 Red Bull Commodore for the first time, making a flying trip back to Queensland in between Porsche duties in Europe.

There were a number of teams in action down in Victoria as well, with Prodrive Racing Australia and Garry Rogers Motorsport both running full test programmes.

PRA ran all four of its cars, with Mark Winterbottom, Chaz Mostert, Cam Waters and Jason Bright all in action. Most of the team’s endurance co-drivers got laps as well, with Dean Canto, Steve Owen, and Garry Jacobson all spending time behind the wheel.

According to team manager Chris O’Toole it was a productive day for the squad as it looks to consistently match Penske and T8 at the front of the field.

“Everything we’ve brought here as a test component has had positives,” said O’Toole.

”Seeing as we’ve been flat out since the February test, everything we’ve brought here today has yielded some sort of result. There are definitely no dead set negatives to take from the cars today which overall is a very good thing.

“The only real negative today was not having [Cam Waters’s co-driver] Richie Stanaway here. It has been valuable having the co-drivers here. They’ve done a great job getting all of their laps in and it’s important at this stage for the engineers to get their feedback as well.

“We’ll be able to take a fair bit of what we learned today into Darwin. The track is as good as it was on the Sunday of the Winton SuperSprint so it’s a good comparison to come here again because it’s like we have come back to race on the Monday after the event. For us today it was a bit like deciding what would you tune up to go again the next day so from a consistency point of view the track has been very good.

“We haven’t had the track like this since I can remember so I’m pretty happy about that.”

Nissan also had a single car in action, running under the ‘evaluation day’ restrictions with Bryce Fullwood and Jack Le Brocq behind the wheel.

The factory squad will save its next round of proper test days until after the Darwin round.