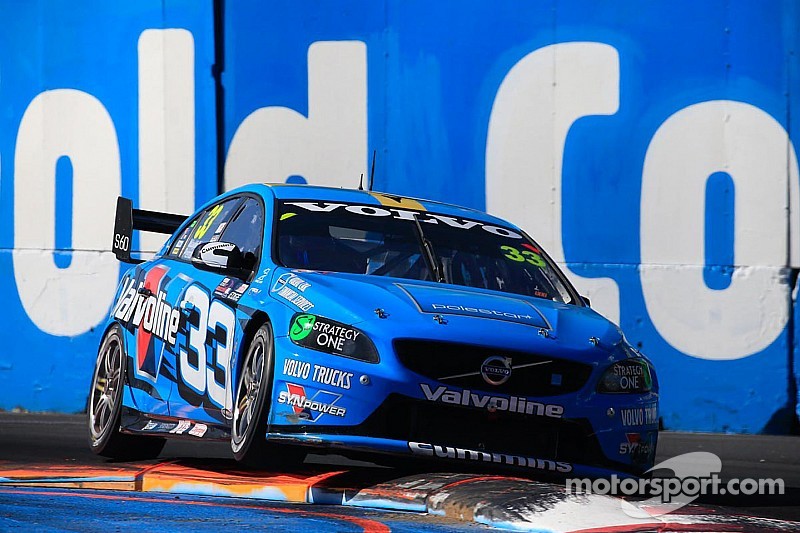 The young star stunned with a spectacular late charge in qualifying.

Scotty McLaughlin is the man of the eleventh hour as he puts Volvo in the spotlight yet again.

Late in the ‘ninth inning’ of qualifying for the second Gold Coast event (race 32), Scott McLaughlin, driver of the #33 Valvoline car, stuck the blue Volvo machine on top with a 1:11.027. Starting off strong during his initial qualifying lap, McLaughlin had provisional pole before being knocked off by the current championship leader, Jamie Whincup. As the minutes dwindled away, however, McLaughlin laid down an incredible lap as the checkered flag waived which put him up in the front.

Red Bull on the charge

Whincup, much cleaner in his qualifying today when compared to the previous day, will start where he finished up yesterday in second position. It was a Red Bull lockout on the front row for some time between Whincup and his teammate, Craig Lowndes, who finds himself out-paced by his teammate yet again.

Although Lowndes was quick, he finds himself once again behind his younger teammate. After several closing attempts to overcome the lap set by Whincup, Lowndes settles in to start the race in third.

Proving that he’s ready to come out swinging yet again, yesterday’s race winner, Shane Van Gisbergen, will start from fourth. Initially faster than McLaughlin for a brief period before his fellow Kiwi came back with his pole-setting lap, SVG will have some strong competition to overcome as he looks to get around the two Red Bull’s in front of him.

Rounding out the top-five of the starting grid is someone we don’t hear too much from anymore in the way of good news. That all changed today, however, as Will Davison brings his Erebus Mercedes into fifth to start the final Gold Coast event.