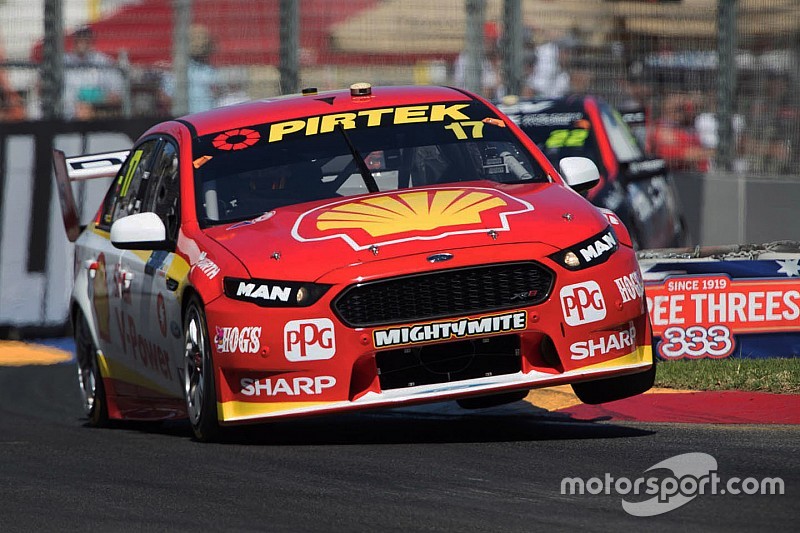 Scott McLaughlin admits he out-braked himself in the closing stages of the second leg of the Clipsal 500, which allowed Shane van Gisbergen to steal a remarkable win.

DJR Team Penske’s high-profile signing looked set to take a fairytale victory on his debut in the closing stages of today’s 205-kilometre street fight in Adelaide, having dominated the first two stints of the race.

However, with Saturday race winner van Gisbergen rapidly closing in, McLaughlin locked his rear brakes at Turn 9 with three laps to go, running just wide enough for the Red Bull Holden to slip through into the lead.

“I just... I'm not confident with the brake package at the moment, I'm still getting used to it,” said a disappointed McLaughlin after the race.

“I just overstepped the mark. Once you lock the rears, you're done.

“Shane got a good run through Turn 8, so I was blocking, but, yeah, we were spent at the end with rears and brakes and everything, so it is how it is.

“I’m gutted. You lead the whole race, control it the whole time, and the last few laps you lose it. That's human, that's how I am.”

McLaughlin added that he was wary of van Gisbergen’s form at Turn 9 – a hard stop after the fast Turn 8 – where the reigning champion passed McLaughlin’s teammate Fabian Coulthard twice during the race.

“He's been strong there all weekend. When I was leading I was keeping an eye on some of the racing behind me on the big screen, and I could see that he had made of his moves into Turn 9,” said McLaughlin.

“It's a bit of a sinking feeling. In some ways I'm ecstatic, in regards to how the team has gone. It's been a fantastic weekend. I feel like we're in a really good spot at the moment. The team camaraderie and the way  everyone got around each other, it's a cool place to be.

“But I really thought today was the day we could have got that first win. I'm kicking myself, but it is what it is.”

Van Gisbergen, meanwhile, said he could tell that McLaughlin was struggling with his brakes, and that Turn 9 would be his best bet to get past.

“I saw it happen a couple of times, even when I was a long way away trying to get to him,” said the points leader. “Just as I got to him I saw the big moment.

"For us it was a pretty awesome weekend. To be saving fuel and run down a gap like that, I'm stoked.”